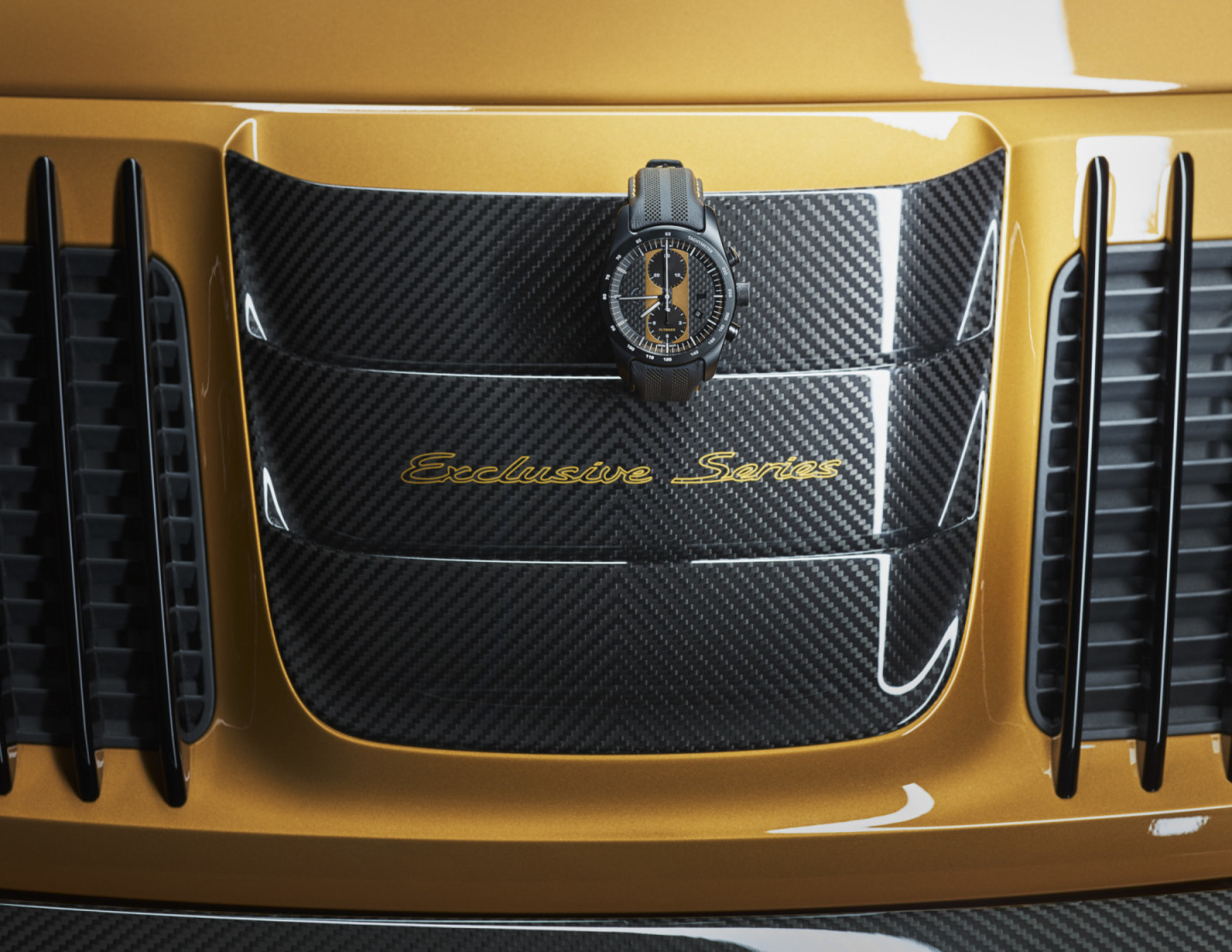 Someone says that watches are the only man jewel, well with this special Porsche 911 you can finally pair your car with your super watch. Fun, if you have deep pockets! Fully handcrafted in only 500 units worldwide, this 911 is powered by the traditional six-cylinder 3.8 liters with an increased power of 27 hp that makes stop the watch in the 0 to 100 km/h in just 2,9 seconds.

What makes the 911 Turbo S Exclusive Series so distinctive is its exclusive Golden Yellow Metallic paint finish and the various components in carbon, like the bonnet, roof and side skirts. The two carbon-weave strips that contour the roof and bonnet accentuate the sporty look of the car. The rear view is characterised by the rear wing of the Turbo Aerokit, the new rear apron, the ram-air scoop in carbon and the exhaust system with two twin tailpipes made from stainless steel in black. The wings are decorated with Porsche Exclusive Manufaktur plates. In addition to Golden Yellow Metallic, the vehicle is offered in a range of other carefully selected exterior colours. In the interior fine copper thread is integrated into the trim strips of the carbon interior package and the plate featuring the limited-edition number on the passenger’s side underlines the car’s exclusivity.

For the first time PorscheDesign has released a Chronograph for limited production that has the same design features used in the actual vehicle. In fact you can buy for around 10k € this chronograph that, just like the vehicle, it is limited to 500 units. Its housing is made of lightweight titanium, and its black titanium carbide coating emphasises its sporty design. The carbon dial is taken from the striking carbon weave stripes on the 911 Turbo S Exclusive Series and finished in the actual paint used on the vehicle. More, the winding mechanism features a typical Porsche central lock with the Porsche crest on the movement.

The lucky owner of this Porsche can also enjoy a special set of leather luggage that has been especially manufactured to fit the two hold-alls and match the color for around 5500 euro.

Prices for the 911 Turbo S Exclusive Series including VAT and country-specific equipment will start from around 260k in Germany. It has been launched on June 8, 2017.

This exclusive 911 could be a little bit flashy but if you don’t mind, it can be a fun jewel to get around with!

IT’s ALL ABoUT SeCONDs

BeTwEeN VaNgUaRd aNd wOmAnHoOd