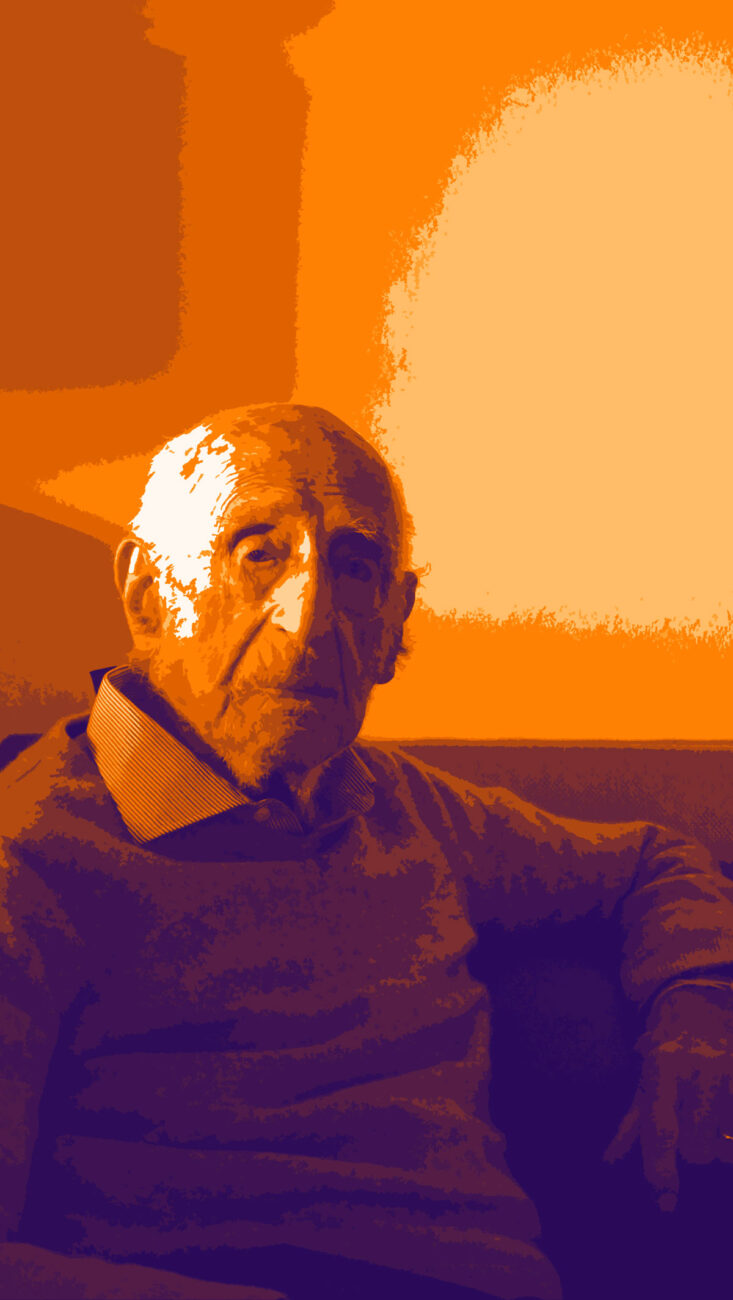 Gillo Dorfles, born in Trieste in 1910, philosopher, intellectual, art critic, professor of Aesthetics, artist, with a degree in psychiatric medicine, founder (in 1948) of MAC, Movimento per l’Arte Concreta (together with Atanasio Soldati, Galliano Mazzon, Gianni Monnet and Bruno Munari), and much more. A man who has crossed a century and its events with incredible energy and elegance, who lives in the present and makes projects for the future, and wants to be remembered above all for his painting. On April 12th he will celebrate his 106th birthday. But that’s just a detail.
I met him for the first time in 1981, during a conference in Düsseldorf, when I was a young member of the editorial staff of the magazine Domus. Over the years we have met on many occasions, and I have always been amazed by his ability to pick up on the most subtle aesthetic and cultural evolutions of the epoch he has crossed, with a glance that detects and investigate mutations and layerings of the reality of things, under the influence of time.
‘Being in time’ is the title of the retrospective exhibition recently curated by Achille Bonito Oliva as a tribute to Dorfles at the MACRO Museum (m.museomacro.org) in Rome: over one hundred works, paintings, drawings and graphics, but also ceramics and jewelry, opportunities to trace back through more than a century of history, by way of the farsighted gaze of someone who has always had a sense of what would come next.
In the program of the XXI Triennale of Milan that starts in April, at Palazzo della Permanente Gillo Dorfles will astonish us again with an exhibition he has curated together with Aldo Colonetti on the theme ‘The Logic of Approximation, in Art and Life’. Approximation, namely that tension between the purity of the idea and the entropy of life, a constructive force that permits us to invent the stories that surround us.
Our conversation took place on a morning in January, in the living room of his elegant home in Milan. He very courteously asks me if I’d like something to drink, maybe something with a kick. No, thanks Gillo, but I don’t drink alcohol, especially at ten in the morning…

D What are the things about our age you dislike?
GD Unfortunately there are lots of them. I dislike politics in general, the political argument. During Fascism I was firmly against politics. Today of course the situation is very different, but politics is still very negative and shoddy, though in any case it is indispensable. Maybe, if there could be a group of particularly outstanding personalities, an enlightened oligarchy – but never a dictatorship! – qualified to govern… a group, not limiting the thing to just a few persons… I think it is possible. There have been positive episodesof oligarchies in the world. It is an idea, a hope for the future.
D What do you think about contemporary art?
GD I have no aversion to anything, in general. In contemporary art there are some positive cases, but most of them are negative… I don’t want to accuse any artist, so I won’t name names… Many artists make the mistake of continuing to produce even if they have nothing to say. Creativity is irrational. At the moment of action, if you have that spark of inspiration you can create something positive. Otherwise it is better to desist.
D Are you in a creative moment now?
GD In this moment I have no inspiration, so I produce nothing. Inspiration comes from your own organism, not just the brain, but everyone has his own sensibility and has to follow that.
D What is your favorite subject?
GD I studied medicine, but I wasn’t suited to practice. It would have been harmful for the patients! My main interest is philosophy, the subject about which I have studied and written the most. I believe that the ability that should be conserved at greatest length is that of managing to understand the ethical, aesthetic and philo- sophical transformations of one’s time.
D What do you desire for the future?
GD For humanity: that it should choose its administrators, without falling into dictatorships. For me, I don’t know: I will wait and see what the future brings. I live in the present. The past is a memory, partly negative, partly positive. I don’t know about the future.
D And yet you have foreseen the future!
GD I hope so, but I don’t know to what extent, with my works that have been and are partially in a state of becoming… I believed I could make works that anticipated the future. I think 80% of artists are not humble, and I’m part of that 80%!
D Advice for young people today?
GD It depends on their nature… to follow their own natural incli- nations, and not to try to do the opposite, as unfortunately often happens. Ever since childhood I have followed the rules of life in a natural way, in tune with my nature…
D What would you like to do?
GD To continue with my literary and artistic activity. And to play the piano, when I feel like it, for fun.
As I move away from the sofa to let the photographer do a por- trait, Dorfles gallantly smiles… “but the prettiest part of the picture just left!”