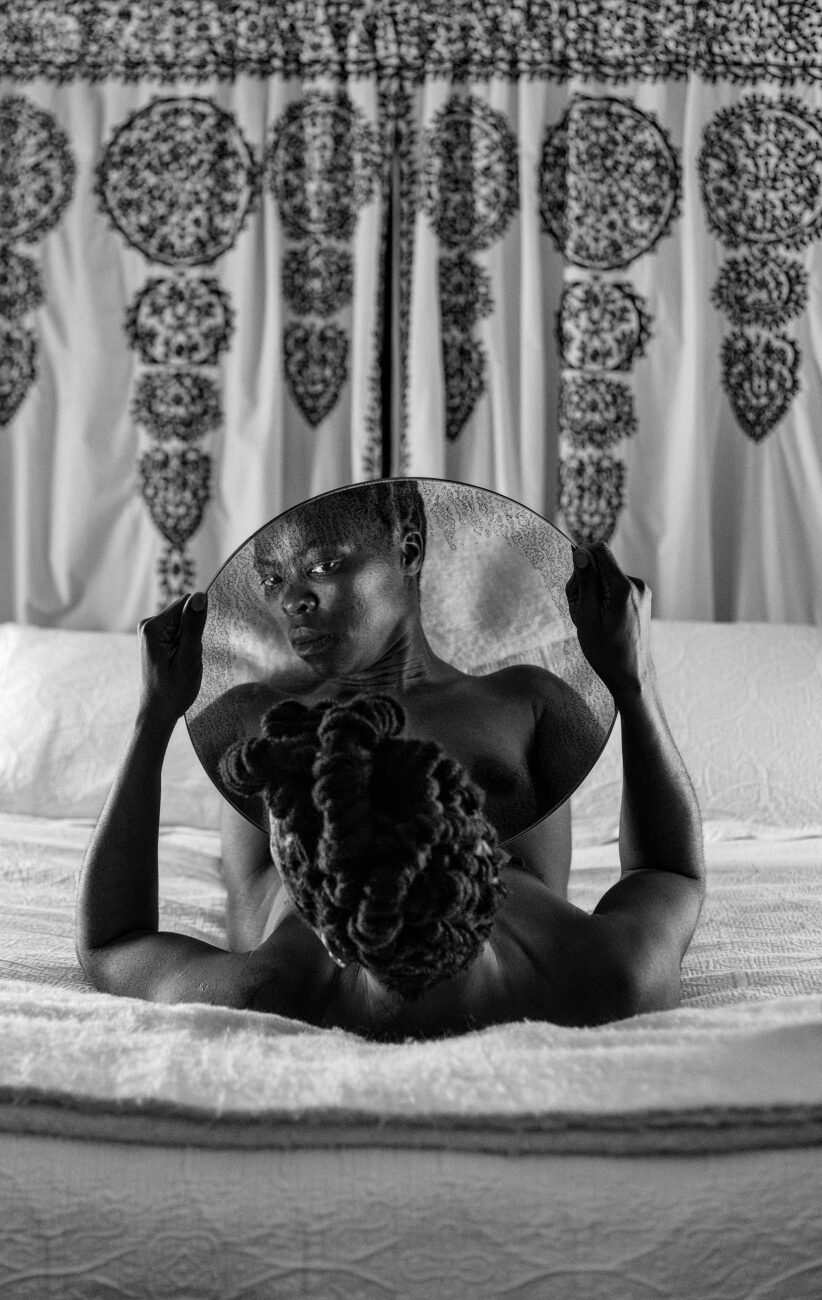 As the first major UK exhibition of the visual activist – running at the Tate Modern until May 31 – is about to come to an end, we explore their documentation of South Africa’s Black LGBTQIA+ communities and reflect upon their contribution to the future of the country

“My mission is to re-write a Black queer and trans visual history of South Africa for the world to know of our resistance and existence at the height of hate crimes in South Africa and beyond,” reads the quote from Zanele Muholi placed on the wall welcoming visitors to their first UK-based solo showcase alongside two extensive self-portrait prints from their (preferred pronouns) ongoing series Somnyama Ngonyama.

Their figure standing clear against a blurred flowery background, as the photographer’s intense gaze captures the attention of those ready to step into their evocative visual tale of South African LGBTQIA+ (Lesbian, Gay, Bisexual, Transgender, Queer, Intersex, Agender, Asexual) communities. A poignant first impression that sets the premises for a much needed, eye-opening showcase.

On display at London’s Tate Modern between November 5, 2020 and May 31, 2021, the exhibition retraces Muholi’s emergence as an activist through 9 rooms dedicated to the photographic work of the Umlazi-born artist. Co-curated by Yasufumi Nakamori, Tate Modern’s Senior Curator of International Art (Photography), and Sarah Allen, Assistant Curator, with Tate’s Head of International Collection Exhibitions Kerryn Greenberg, the show relies on Muholi’s visual storytelling as a means of tackling themes such as gender and sexuality-based discrimination, hate crimes, and racism as experienced by South Africa’s Black queer community.

Born in Umlazi, Durban, in 1972, Zanele Muholi is a South African artist and visual activist whose production spans across several mediums, including photography, video, and installation. The recipient of an Infinity Award from the International Center of Photography (2016), a Chevalier de Ordre des Arts et des Lettres (2016), and an Honorary Fellowship of the Royal Photographic Society (2018), in less than two decades of activity they have established themselves as one of the key figures reshaping today’s imagery and narrative of Black South African queerness.

If you happened to stand in any of the perfectly-lightened rooms spotlighting Muholi’s work, I am sure it would not take long for you to feel – rather than just seeing it – what each one of the people, moments, and intimate stories documented by the visual activist actually signifies for the history and evolution of South African culture.

Countering the white patriarchal gaze that has been responsible for the objectification of Black women’s bodies ever since colonialism, and rejecting all images upholding heterosexuality as the default sexual orientation, their documentary practice attempts to sew the wounds inflicted upon South African Black LGBTQIA+ individuals by centuries-long racial segregation and sexuality-based discrimination.

Positioned at the intersection of art and activism, Muholi’s production dismantles the misconception that queer life is ‘unAfrican’ – a conviction that emerged from the belief that same-sex orientation was a colonial import to Africa – to celebrate love and intimacy beyond prejudice.

“Since slavery and colonialism, images of us African women have been used to reproduce heterosexuality and white patriarchy, and these systems of power have so organised our everyday lives that it is difficult to visualise ourselves as we actually are in our respective communities,” the visual activist and artist explained.

“The images we see rely on binaries that were long prescribed for us (heterosexual/homosexual, male/female, African/unAfrican). From birth on, we are taught to internalise their existences, sometimes forgetting that if bodies are connected, connecting, the sensuousness goes beyond simplistic understandings of gender and sexuality.”

In Muholi’s projects, the people photographed are not mere subjects but rather ‘participants,’ as the photographer likes to call them; a term that exemplifies the nature of the relationship that the visual artist builds with those who get to stand before their lens.

As a matter of fact, many of Muholi’s participants are also members of their collective, Inkanyiso (meaning  ‘light’ in isiZulu, their first language), a platform thought to “produce, educate, and disseminate information to many audiences, especially those who are often marginalised or sensationalised by the mainstream media.”

Through Inkanyiso, Muholi provides South African LGBTQIA+ people with the support, mentorship, and skills sharing necessary to emancipate themselves from the implications of the stigma directed at non-binary and trans individuals. Conceptualised in 2006 by the photographer themselves, the initiative highlights the meaningfulness of their contribution to the shaping of a more democratic South Africa while also serving as an ‘ever-expanding’ visual archive documenting all aspects of Black queer life  – from Pride marches and protests to private events.

Not only did Zanele Muholi and their compelling body of work grant numerous South African Black queer people the opportunity to reappropriate their own bodies, experiences, and stories amid prolonged violence and marginalisation; yet, by inviting them to contribute to testifying the existence of the Black LGBTQIA+ community over time, the visual activist is also creating an inclusive space where, quoting their own words, people finally get “to write their own history and validate their own existence.”

You can visit the Zanele Muholi exhibition at the Tate Modern until May 31, 2021