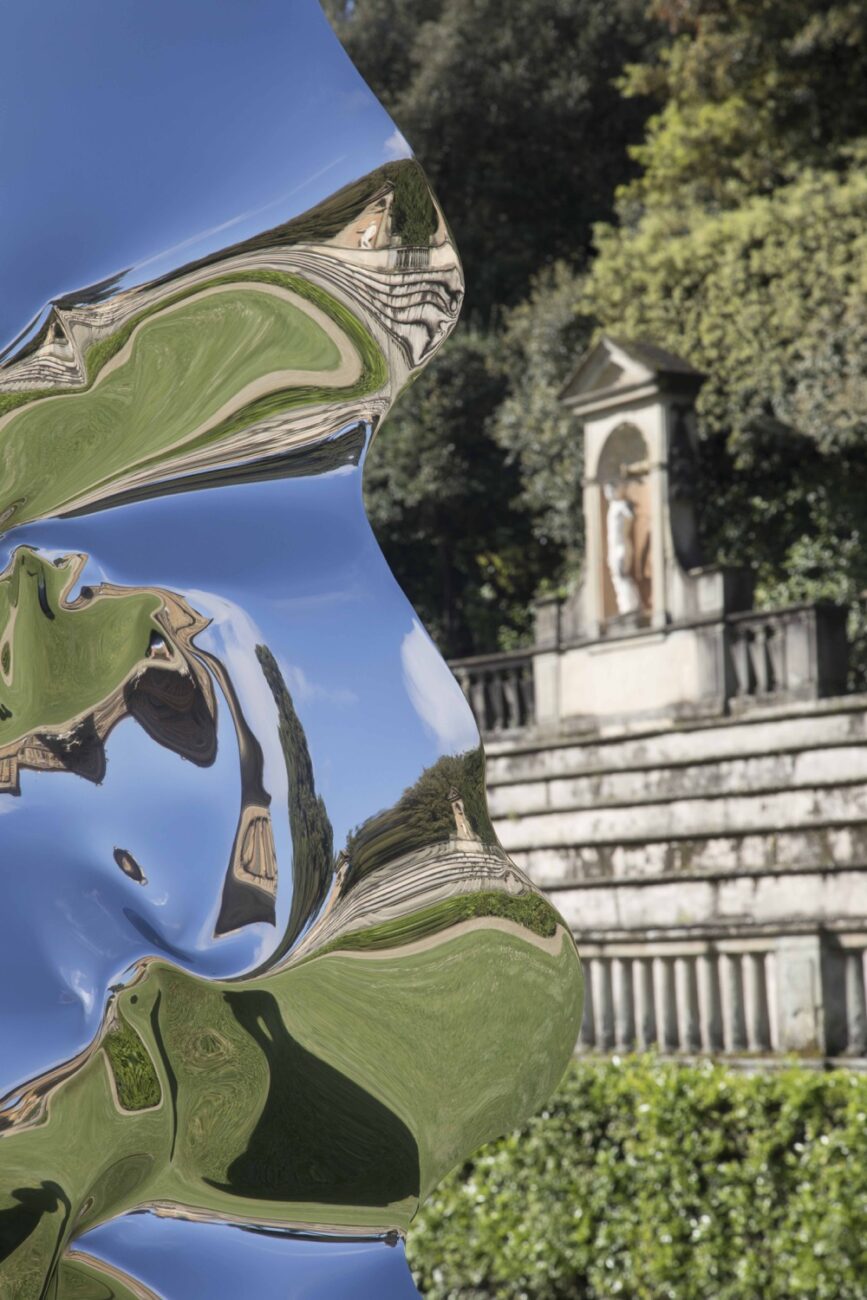 During his career Xhixha has developed a unique and now iconic style of sculpture and is known for his extraordinary ability to manipulate mirror polished stainless steel into amazing abstract objects of immense grandeur and beauty. Xhixha creates a visual commentary on the interplay between metal and light, between the physical and the intangible, with a perfectly flat flawless plain suddenly transformed, distorted and disturbed. Recent successes at the 2015 Venice Biennale and the 2016 London Design Biennale have secured his position within the international art world and his work is now some of the most instantly recognisable and highly sought after sculpture today.

Albanian by origin, now living and working between Milan and Dubai, Helidon Xhixha was born into a family of artists, with his passion for sculpting coming from his father at a young age. He has achieved continued success for his iconic stainless steel structures, which now feature in public and private collections globally. Xhixha is perhaps most widely known for his Iceberg sculpture, tackling the subject of climate change, which became the first installation to be given permission to travel along the world famous Grand Canal at the 2015 Venice Biennale. In 2016 Xhixha was selected to take over the central courtyard of Somerset Award House during the inaugural London Design Biennale. His award winning installation Bliss focused on the issues of migration and displacement currently faced by the world and was presented with the important Public Award.

This summer, the Director of Florence’s worldfamous Gallerie degli Uffizi, Eike Schmidt, has invited the artist to present a major new personal sculpture exhibition, set within the stunning surroundings of the famed Boboli Gardens. To be asked by the Gallerie degli Uffizi to create his vision in this incomparable setting is a great honour and Xhixha has risen to the challenge.

In Ordine Sparso sees Xhixha explore the ideas of chaos and order through his extraordinary series of thirteen monumental sculptures and installations, taking his inspiration from nature and the principles of the sacred geometry. Dramatic in design and execution, they invite us to explore and investigate the very idea of “chaos”. The works pay homage to how historically this concept has been portrayed and the role of the artist seeking to represent chaos and how it is interpreted in the natural world.

In the Limonaia of the Boboli Gardens the artist has looked to nature to understand chaos. Inspired by the Crystal Caves in Naica, Mexico Xhixha has designed a complex response to their seemingly random formation: great towering columns of mirror-polished stainless steel, entice the visitor to enter and explore the artist’s vision. Mirroring this is the work representing order, based on the concepts behind the sacred geometry. These monumental structures are formed in response to the Golden Ratio, mathematical principles whose roots are found in nature.

Situated either side of the entrance of the Palazzo Pitti Xhixha presents Conoscenza and Infinito. Conoscenza reminds us of the spiralling Nautilus shell, nature’s most recognisable answer to the Golden Ratio. Giant curved segmented steel spiral outwards from a central point, increasing in size as they oscillate. Infinito reminds us of the fundamental concepts of order, balance and regularity. The artist has created two sloping forms, fragmented and rising in opposite directions they sit side by side. They are at once the same yet entirely different and they parallel not only each other, but the entire exhibition. Xhixha allows us to see how opposites can be understood not as disparate entities but as a single concept.

Through their shapes and reflective surfaces, the thirteen breathtaking sculptural installations offer new perspectives and seem to demand that we look back to he intertwining of art and nature, as promoted by the Medici in Sixteenth and Seventeenth centuries.