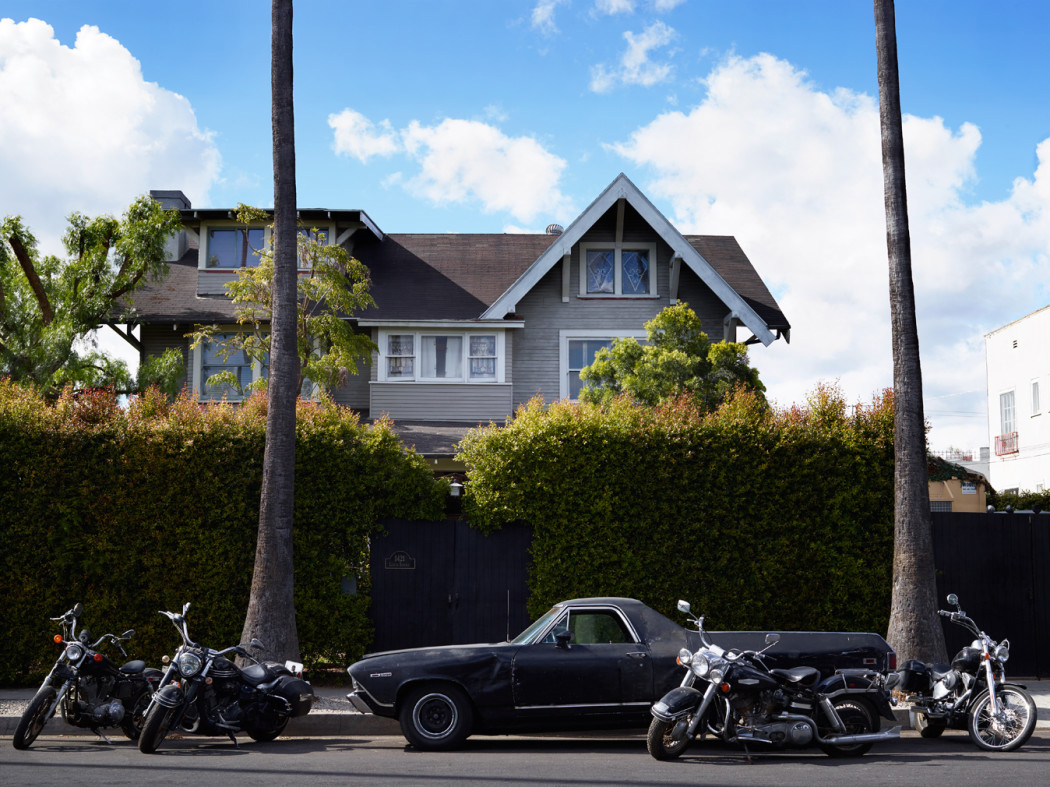 Tom of Finland’s work is an everlasting pop phenomenon that is constantly referenced but not thoroughly investigated. We tend to focus on the art’s muscular and lusty facade, while ignoring the scenery where that happens. Those larger-than-life characters may look steroidal but they’re hardly the embodiment of testosterone. Their aggressive behavior is depicted in a way that’s tongue-in-cheek, winking and soft. This brand of manliness has become a gay archetype because it’s so, well, gay, as in joyous. The rape-y scenarios are always mutually agreed on and everything is pristine, neat, perfectly pressed, groomed, slicked. It’s a homosexual arcadia of eternal summer, dark corners and sexual trysts.
The place where Tom of Finland (born Touko Laaksonen,) lived and worked in L.A. is another unexplored angle in which reality and fantasy fit well together. His home appears to be a physical representation of his fantasy world.
A new book invites us inside the Tom of Finland house- which is carefully preserved as a shrine to Tom’s independent spirit–to witness the transition of what used to be considered depraved home decor into celebrated art that today is part of many major museums collections.
The House also serves as headquarters for the TOF Foundation whose primary goal is to promote Tom’s work along with other erotic art so that it receives the academic attention it

“Walking through the house sometimes will make you laugh, giggle and even perhaps blush. You may get a lump in your throat or even in your pants.”

deserves.
To understand this passion project, I meet author Michael Reynolds at Julius, one of the oldest gay bars in Manhattan. He is sporting a trimmed beard and a tight black T-shirt, looking the part.

Why did you make this book? Does Tom of Finland resonate with you personally?
I had visited the house in the nineties and had done an earlier shoot with the artist Jack Pierson. The house fascinated me instantly: here was a world that felt kind of familiar yet totally at odds with the surrounds of LA. I also just love its sense of community – it’s truly a home that has welcomed so many over the years – and it fulfills an important cultural function, being the largest repository of erotic art in the world. Personally, I’ve always been captivated by outsiders and things that exist beyond the constricts of mainstream culture. That’s where I think you can find true influencers and people that have something to say about the broader world.

The “theme” is –to say the least– very cohesive. Is this the documentary of an obsession?
It’s more a glimpse into Tom’s World and a community. It all coalesces-the art, community and style. It’s a very natural, organic environment and while there are certainly beautiful rooms, it’s not really about a contrived decor or vision.

Could the Tom House exist outside of the context of a Los Angeles aesthetic?
Well, conceptually, it could be probably exist anywhere, but physically it’s very much of its place. From the outside it looks like a charming Craftsman style cottage that may house a middle-class family (with a slightly boho bent). With its rambling outdoor garden and hedge, it feels totally California. Also, that whole come-as-you-are wild-west spirit of California seems to pair really well with Tom’s vision. It’s very much a “freaks welcome” kind of place.

Do you see the house as a template for “masculine” décor? Also, is this a quaint idea of what looks gay?
Yes, it’s pretty masculine. But nothing is decorated per se. One corner may have a stack of camp books and Auntie Mame ornaments and another will hold ashtrays overflowing with Marlboro Lights. It’s eclectic. It’s a living, breathing unfolding experiment. There is going to be flashes of the past, with ephemera and history. But there’s always newness and young artists leaving their imprimatur. It’s completely alive. It’s a man’s world. How do women respond to his hyper-butch aesthetic? Women love Tom House. You can see that through the popularity of the drawing classes run by the Foundation. And not all of the erotic art is based on the gay male experience.

Michael Reynolds is a New York–based creative director. He was a member of the original team that conceived and launched Wallpaper Magazine, for which he currently serves as U.S. Editor. “Tom House: Tom of Finland in Los Angeles” is published by Rizzoli.
https://www.rizzolibookstore.com/tom-house-tom-finland-los-angeles