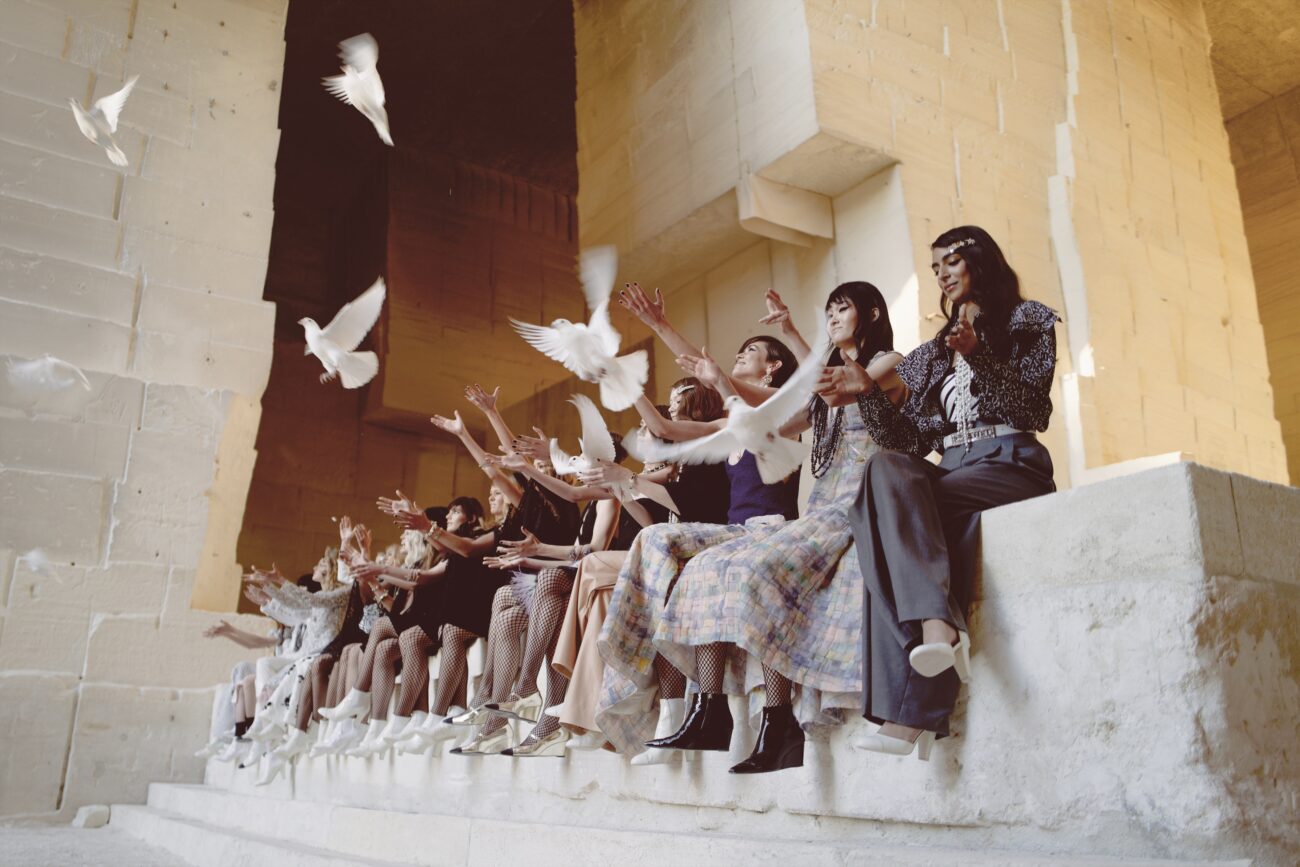 Chanel’s 2021-2022 cruise collection is a tribute to Jean Cocteau, poet, playwright and friend of founder Coco Chanel. Virginie Viard retraces the story of the friendship between the two and mixes Coco’s personal style with a rock vein. It concludes with a flight of white doves followed by a musical performance by Sèbastien Teller with royal guests at the microphones

Virginie Viard looked to Jean Cocteau, presenting the collection inside the Carrières de Lumières, the white quarries in Les Baux-de-Provence where the artist had set one of his most famous films, The Testament of Orpheus in 1959. Between Gabrielle Chanel and Jean Cocteau there was a strong friendship and also a great artistic partnership. With great talent, Coco Chanel became costume designer for several of the playwright’s works. In 1922, he invited her to design the costumes for his Antigone, a rewrite based on Sophocles’ play. Chanel’s classical essentiality appeared on stage: no more redundant and fake nineteenth-century costumes, but simple tunics of rustic wool, adorned only with embroidered Greeks. More than a costume, the creative gesture. On June 20, 1924, the Théatre des Champs Elisées in Paris staged Le Train Bleu by Cocteau, one of the funniest and most ironic ballets made by Sergei Diaghilev, the creator of the famous Russian Ballets, who asked Chanel to design the costumes. The curtain was painted by Pablo Picasso.

The architectural purity of the location, unspoiled by the presence of the public, actually lends itself well as a backdrop to the show, and the choice to film almost everything outdoors, with the sun at its highest point, only accentuates the atmosphere.In the evocative location, letters sent by Jean Cocteau to Gabrielle Chanel were displayed, as a tribute and testimony to their wonderful friendship and respective artistic esteem. Viard takes a trip down memory lane, mixing Coco’s personal style with an exuberant rock vein and exquisitely drawing on the deep and intimate heritage of the house. At the end of the show, they were released from the doves, as an allegorical figure of Cocteau’s “colombe de la paix”, between the white walls of the Carrières de Lumières: a gesture of good omen and return as soon as possible to the freedom to travel, it is known that in the journey there is a certain flavor of freedom, simplicity … a certain charm of the horizon without limits, the path without return, the night without a roof, life without superfluities.

To end it all, the white birds were not enough, but the strong notes of multi-instrumentalist Sebastien Tellier, this time accompanied by exceptional guests. For those who remember pearls such as “Ouragan”, the song with which Princess Stéphanie of Monaco launched her short-lived career as a pop star in 1986, seeing her granddaughter Charlotte Casiraghi take over the microphone to duet with the famous electro-pop musician to the tune of his song Roche. Let’s face it, it’s the nostalgia operation that counts, it’s gold!

In addition to Charlotte, a number of other brand ambassadors performed with the talented Tellier. Belgian singer Angèle, the muse of the Coco Beach collection, gave the audience a cover of Baby One Time by Britney Spears; then it was the turn of actress and singer Vanessa Paradis, who has been a Chanel ambassador since 1991 (her iconic Jean-Paul Goude ad in which she was transformed into a bird in a cage) and French musician and producer Juliette Armanet, enchanting to the tune of a song by Julien Doré.

Having such a meticulously illustrated “Le Livre Blanc” is a luxury that the Maison offers to the present designer, plundering Coco Chanel’s emotions is a duty, this is how she allowed us to live a wonderful memory in the present.

WaTCHeS AnD wONdERS OPEnS ITS DOoRS