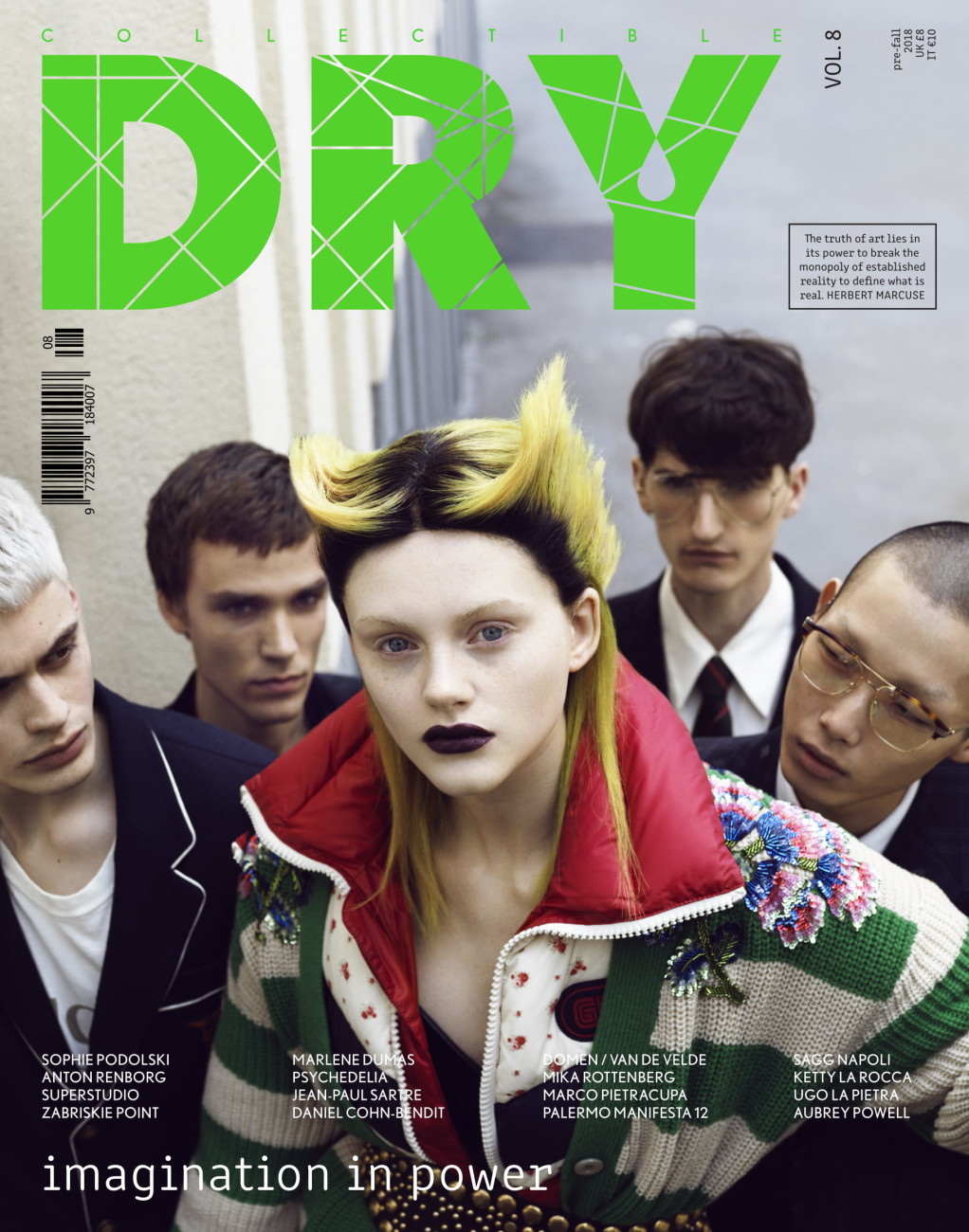 Take a look at the issue 8 extract

Once upon a time things were much simpler. I stood here, you stood there, something else stood in the middle, but it was always graspable, contextualized, worthy of opinion. I stood against the war, against hunger, against imperialism, against injustice, against dictators, false prophets, ideologies, religions, conformism. I fought for workers’ rights, to make my body my own, and I’m in charge of it, democracy, freedom of expression… There, that last one: having the freedom to express oneself. Thinking identified strong issues, created slogans (statements?), and then we took to the streets to prove we were alive, because we had ideas. We felt strong, because we were united. Strong, because through imagination we rose to power and ultimately empowered imagination in turn. The year was 1968 and the entire world was swelling with hope, with a desire to change. People wanted radical change; they wanted to overturn all the certainties that had created a foundation for the bourgeoisie before them. The massive economic growth that followed on the heels of World War Two and the subsequent peace (at least in the West) created certainty. Young people, both bourgeoisie and blue collar, longed for something more. Work and education were no longer enough. People wanted to be free, to fight for rights, even those of the weakest among us, and along with them affirm their own individuality, their own intrinsic value.
There are grand people, cultural legends and lights in the dark shadows of our contemporary world. They have tried to change the world, and still accompany us today, attempting to shine a light on our new world, a place they perhaps intuited and attempted to avert; an individualistic, amoral, spoiled world. A world of appearances and non-being, satiated by the superficiality of social media connections. In this issue Guido Toraldo di Francia, Ugo La Pietra and Aubrey Powell share their powerful thinking with us, and the ways in which it influenced the imaginations of more than one generation. There are grand female artists, some of whom we lost all too soon, like Sophie Podolsky and Ketty La Rocca, who investigated the relationship between visual and verbal languages, especially in connection with the female condition, turning their investigations into political discourse. Like Luce Irigaray, a French linguist, psychoanalyst, and feminist philosopher who examined the uses and misuses of language in relation to women, and in this issue has inspired pages created by a young team of photographers and designers. And contemporary artists like the legendary Marlene Dumas, whose figurative works have earned her a place among the most influential painters of the 20th and 21st centuries. With her oeuvre of haunting portraiture, she consistently explores themes of sexuality, political oppression, identity and feminism. Her work is informed by her childhood experiences growing up under Apartheid, and addresses social struggles of oppressed people around the world. Or Mika Rottenberg, whose elaborate visual narratives draw on film, architectural installation and sculpture to question labor and globalization, economy and the production of value, as well as the ways our own affective relationships are increasingly monetized. Weaving documentary elements with fiction into complex allegories for the human condition, she jumps into the seduction, magic, and desperation of our hyper-capitalist reality. Then there’s the very young Sofia Ginevra Giannì (SAGG Napoli), who uses narration as a tool to examine a complex socio-political knot, that of the South, its historical traces and geo-political entanglements. Placing her body within a specific time and context, she reflects on notions of productivity, self-control and achievement; the context is Naples, her birthplace.
Through fashion we can hunt just how many traces of our history and the power of our imaginations can be found in contemporary life: the memories of a bunch of dreamers from the 1960s; or the sexy attitudes of the groupies who crowded concerts and artists’ factories within the pop and underground scenes. Luxurious Parisian haute couture counterbalances design-outfits that detail the slavery of work and money. Carlo Mollino’s legacy pays homage to real women, so liberal and carefree that they seem like innocent creatures, and punk – which isn’t dead, but has moved out of counterculture to become a source of inspiration for contemporary fashion.
Palermo has been elected Capital of Culture, opening up to art and putting all its contradictory beauty on display. A voyage into psychedelics shows us how the controlled use of hallucinogens can become (and was for some of our planet’s great minds) a way to open up to the world, amplifying the senses and emotions, distorting our perception of reality. To what extent did this influence artistic and creative performances? No one knows, despite the fact that illustrious researchers convinced themselves that LSD might have additional applications beyond clinical studies. Ultimately it came to represent a means for spiritual growth and exploration, thanks to its remarkable entheogenic properties, thereby inserting itself into the alternative cultural movements of the 1960s and rapidly becoming a symbol of hippie culture. Then again, in recent years a trend has developed, especially in Silicon Valley, of using “micro-doses” of LSD, not to obtain any psychedelic effects, but to improve problem-solving capacities, creativity, a sense of well being and ultimately some cognitive processes.
So if this reality rings true, then everything that is counterculture today will become a consumer good and tool for the powerful tomorrow, shedding its imaginative and revolutionary charge. Maybe it’s time to restore meaning to the words of the preeminent philosopher, political activist and major intellectual influencer on the New Left and student movements of the 1960s, Herbert Marcuse: Thought that accepts reality as given is no thought at all.  One-Dimensional Man, 1964

The truth of art lies in its power to break the monopoly of established reality to de ne what is real. Herbert Marcuse, An Essay on Liberation, 1969

-In USA/WORLDWIDE it will be out mid SEPTEMBER-