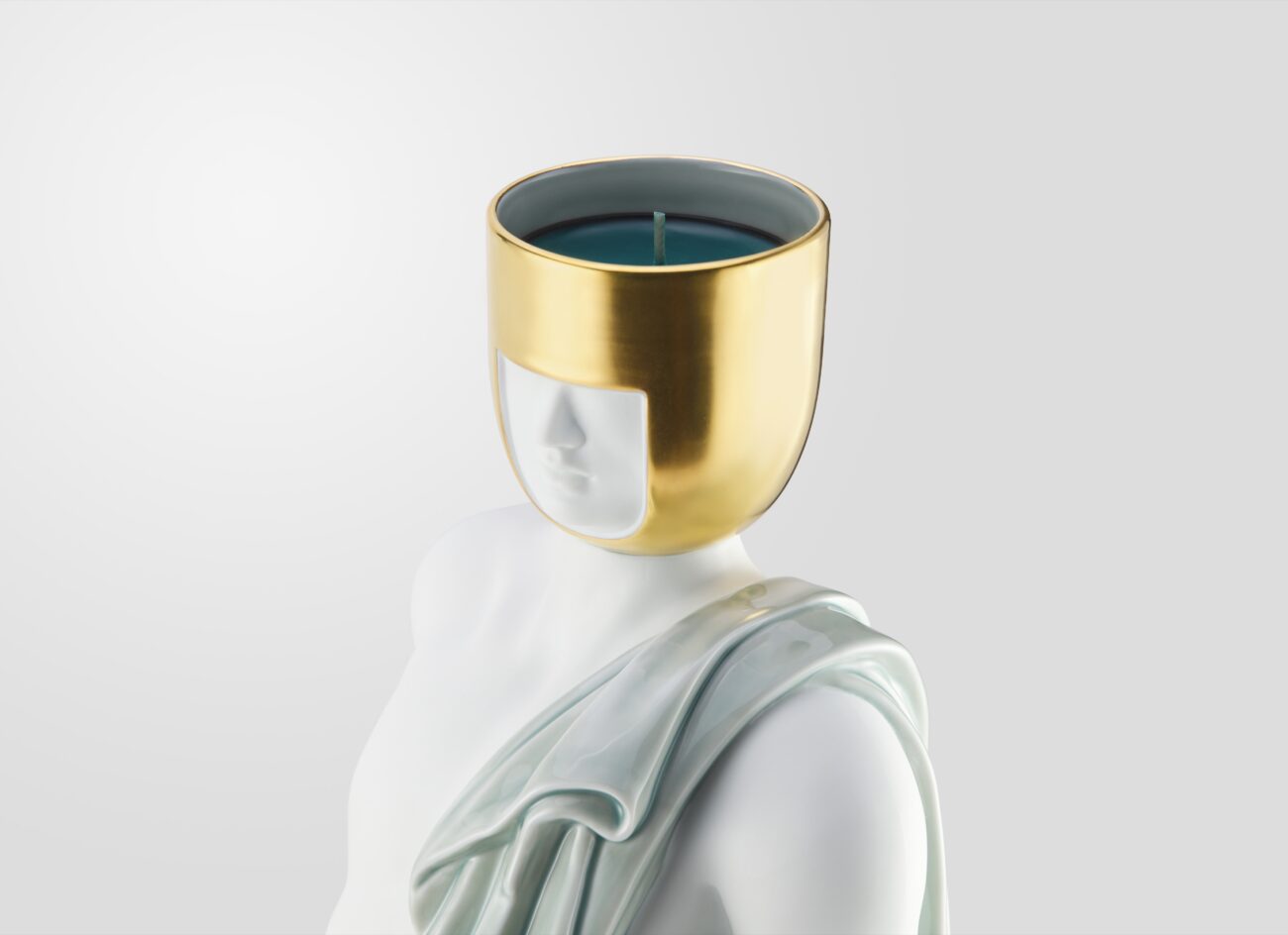 Light My Fire. The key characters of  LCDC — acronym for “La Compagnia Di Caterina” — stem from the contemporary vision of designer Luca Nichetto. A perfect synthesis of the Renaissance atmosphere and the figurative tradition of Ginori 1735, they stand out for their study, research, and development of uniquely designed forms, in a harmonious balance between memory and innovation and under the banner of the highest craftsmanship.

To create the collection, Luca Nichetto reinterprets the figurative art of the factory, drawing inspiration from Lucha Libre masks, Jean-Paul Goude’s illustrations, and graffiti art. The statuesque faces of the characters, in the creative vision of the designer, become the archetypal protagonists of the collection, composed mainly of candles developed in various sizes and colors and completed by incense holders and wand diffusers.

With a design that mixes the classicism of ancestral statues with rigorous lines, the faces and sculptures take on an iconic and mysterious dimension. A fusion of graphic symbols with an alchemical flavor and colors that recall the ingredients used to create the fragrances, the names are already very evocative: Orange Renaissance, Black Stone and Purple Hill are three different fragrances declined in candles, incense and room diffusers that, thanks to refills, never run out.

Collectible DRY: What was your approach to a company with a vast heritage like Ginori 1735?

Luca Nichetto: Whenever I work with a historic company that has an important heritage, even before thinking of a project, I try to get an idea of its history, I dive into the archives, I try to understand why they became famous and from there I proceed by subtraction, finding my own way of bringing this heritage into the contemporary.

DC: What was the primordial fire that allowed you to give birth to the project?

LN: I found the right link that could make me float harmoniously with who I am and the Florentine company. I’m originally from Murano and it’s exactly in the lagoon of Venice, with the great naval convoys, that Western and Eastern essences met for the first time, turning Venice into a point of reference in world perfumery.  In the thirties of 1500, following her marriage with Duke Henry of Orleans, Caterina de’ Medici introduced the French court to the use of perfumes. A symbolic itinerary that one between places and traditions, that unites Florence, home of the historic Ginori factory 1735, Venice, a place of exchange and contamination as well as my birthplace, and the Paris of Jean Niel, the oldest French perfume company. It is through this historical excursus that I gave life to this home fragrance collection for Ginori 1735.

LN: I thought of a narrative that could have a continuum, objects capable of telling stories, like a television series, take Game of Thrones as an example, a theater of exciting stories and court intrigue that piques the curiosity, nodding at what happens next.

CD: I was struck by the dualism in the composition of the two characters; the Amazon made up of straight, rigid lines and the Lady of the house made up of soft, undulating patterns.

LN: Exactly! Personified objects imbued with symbolism. If you think of the Friar, depicted through an incense holder, the choice of that specific object was not a coincidence. The Friar is a symbol of generosity, a connoisseur of the alchemy of the human soul who always knows how to be helpful. In fact, all the ladies of rich lineage had at least one friar alchemist who was dedicated to the processing and extraction of herbs and their essences. The fact that the Lover is represented through a half-bust that echoes classical eros is also purposeful.

Design and centuries of history intertwine, the packaging reveals the re-edited Medici symbol with a flame in the center, and the characters are linked by Light My Fire, the leitmotif that emphasizes burning for something or someone, the flame that is lit in homes to rediscover the values of the glorious Medici family, and always current, such as leadership, wisdom, friendship, generosity, passion, grace, and ambition. Luca mixes the classicism of ancestral statues with rigorous lines, in a fusion of graphic symbols with an alchemical flavor and colours that recall the ingredients used to create the fragrances.