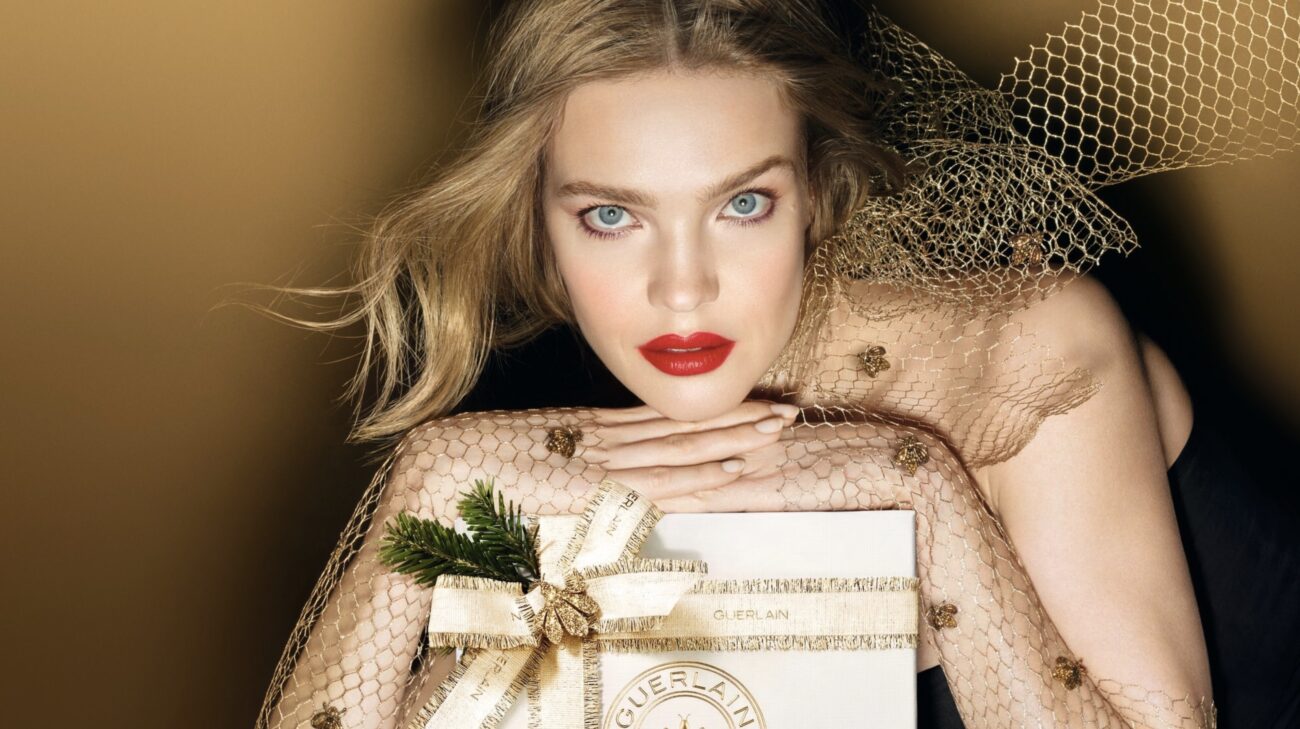 The three must-haves for the mise en beauté on festive evenings are also lucky charms. And just like that

Is there an unconscious reference to the Wise Men, who knew all about gifts, in the irresistible feminine desire for precious, shiny and scented things to celebrate the festive season? Be that as it may, Chanel’s Holiday 2021 Make-up Collection meets the requirements perfectly: inspired by the colour codes of N. 5, the charismatic fragrance of the Maison which, on the centenary of its creation, hosts a large gold 5, the essential limited edition series dresses the face, eyes and lips in charming shades. Star product of the line is the Palette Les 4 Ombres: the wafers range from nacré white with golden highlights, antique gold glitter, ivory and intense matte black. For the lips, the iconic Rouge Allure No. 5 is declined in as many shades as possible, from garnet to a warm bois de rose.

Golden pollen in profusion in the Guerlain party look is a hymn to bees, the precious guarantors of ecology as well as the totemic presence of the Maison: for the complexion, the classic Metéorites add golden pearls to the mix of pink and beige spheres, while the compact of the Terracotta blush manifests itself under a rich monogram in gold nuggets; for the eyes, Mad Eyes eye shadow stick is made available in two iridescent shades. Another novelty is the Mad Eyes eyebrow gel pen with golden pearls. On the lips, the iconic Rouge G takes on two new shades, 34 Gold Red and 35 Gold Brick with a marbled texture, enclosed in glittering sequin covers; available in the best perfumeries. The super de luxe version is Rouge G Prestige Edition Gold Bee Sequins, stick shade 214 satin red, cover with black velvet inserts embroidered with gold threads and beads.

Inspired by rose gold creations, the trendiest of modern jewellery, Rose Gold Eau de Parfum is the new Tiffany & Co. fragrance. The fresh-floral bouquet, lively with fruity notes around the shining accord of blue roses on a musky base of enveloping sensuality, is enclosed in the jewel bottle with faceted details, almost like a large pink diamond. An auspicious promise worthy of the legendary brand, an emblem of happiness that has made girlfriends all over the world dream. Because, as Nina Nesbitt sings in the campaign video, All you need is love.

What Dior offers with the special Holiday Collection is not only a series of sumptuous and precious make-up for the most splendid festivities of the year, but the sensation of a mise en beauté in the temple of Parisian fashion, that “Atelier of dreams” in avenue Montaigne 30 where the genius of Christian Dior made his debut: all the elements of the series, from the cases to the outer packaging, from the compacts to the sticks, in fact, bear imprinted architectural codes and profiles taken from the facade of the Maison, whose reopening is being celebrated.
The Palette 5 Couleurs includes two eyeshadow harmonies: 469 Atelier Doré in warm tones, from beige to coppery brown around a shimmering gold, and 739 House of Dreams for smoky eyes from peach to pink to dark tones around a shimmering silver; each in chromatic coordination with the respective Diorshow 24H Stylo eyeliner. For the lips, The Atelier of Dreams offers Rouge Dior in four shades, including the velvety red 862 Winter Poppy, to be displayed in the special separate collector or found in the Rouge Dior Minaudière, a delightful golden clutch with the entire lipstick set, including fillers. Diorific fans will also find the collector’s stick, again in four colours including the intense Rouge Capucine. The Holiday Collection is completed with Rouge Blush in the coral shade 601 Hologram and Diorific Vernis nail polish, 862 Poppy and 992 Corolle.

There is always something magical about the hour when day turns to night. The sky like a time-lapse video, with its flashes of iridescent colours that convey deep emotions: it happens all year round, but in the season of ancient rites and zodiacal transitions, solstices and the new year, the suggestion becomes even more intense. So now, more than ever, take in the enchantment of Gloaming Night, the twelfth and most imaginative title of The Alchemist’s Garden, a Gucci collection inspired by the ancient science of alchemy, as suggested by the ruby red glass apothecary bottle adorned with mysterious and symbolic symbols. Serene with vetiver, gentle-stimulating with cinnamon and deep with patchouli, the fragrance is perfect in every circumstance and on every person: genderless as the series requires, it can be worn alone but is formulated to allow for multi-layering with other essences of The Alchemist’s Garden in a personal creative combination.