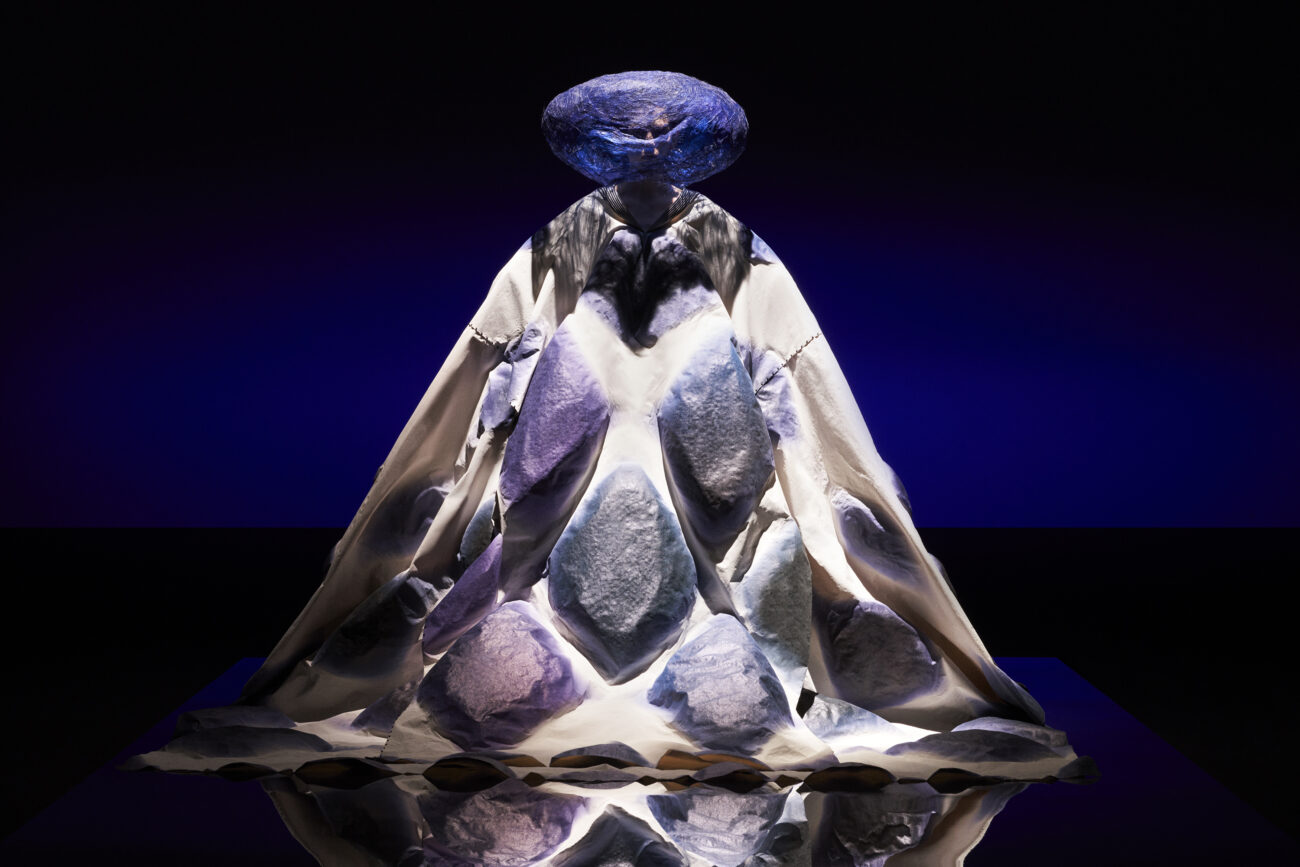 Haute Couture: a bridge between past and future.

All the highlights of this season

Iris Van Herpen introduces us to a world of ethereal and enigmatic creatures from distant galaxies. The collection takes its name from William Anders’ photograph – Heartrise – taken in 1968 during the Apollo 8 mission. And the clothes look like a tailored version of futuristic spacesuits. Sleeves flare out in the wind, while ultra-light flounces create weightless silhouettes. Fretworks and carvings are always present, linking these creations from other dimensions back to an artisan and sartorial dimension. In addition, the aesthetic of this collection refers to the kinetic art works by artists James Merry, Casey Curran and Rogan Brown. This is summed up by the jump of parachutist Domitille Kiger who, wearing a Van Herpen dress, creates an indissoluble union between earth, sky and space.

After presenting the collection for Louis Vuitton, Virgil Abloh is back on the catwalks with Off-White. However, the double commitment seems to have become an unbearable burden for the American fashion designer. Abloh displays both menswear and womenswear 2021-22 F/W collections, but they seem disharmonious and unrelated. For the coming winter season, Off-White thinks about an aggressive woman, with emphasised shoulders that make jackets look like armour. The long dresses alternate rigid and soft parts, in a game that seems to reflect on body’s movement. On the other hand, the male pieces suffer from a worrying dryness of creativity. The masks by Masakatsu Shimoda look like a fashionable version of Frank’s in Donnie Darko. Intriguing, of course, but COMME des GARÇONS had already proposed them in 2018. The sleeveless puffer vests are eye-catching, but very similar to those presented by Balenciaga in 2017. The rest is a mix of streetwear and tailoring that is just unsuccessful. A few electric blues or the final music show are not enough to save an anonymous collection, which we are pretty sure will not end up in the fashion history books. Abloh is a smart person and maybe, at this stage, it would be better if he chose where to concentrate his efforts.

A joyful note comes from Schiaparelli’s collection. Resurrecting a dead brand is always risky and the results have often been disappointing. Nevertheless, Daniel Roseberry succeeded in designing a collection that managed to pay homage to Elsa Schiaparelli without being rhetorical. The Matador collection is opulent, provocative and, above all, it is a slap in the face to the minimalism of recent years. Shocking pink sits alongside black, orange and sky blue, without compromise or nuance. Everything is decorated with gold and silver embroidery and metallic appliqués. Quotes abound. There is Jean Cocteau, honoured with a black wool crêpe dress with curved sleeves, decorated with roses, which refer to his collaboration with Schiaparelli in 1937. Of course, there is Surrealism, which returns in the jewellery, which, like an ironic trompe-l’oeil, simulates anatomical parts. Earrings, for example, turn into eyes and ears, in a disorienting continuation of corporeality. Gold replaces textile, turning the bust into a rose garden, while necklaces are elongated, branching out in the shape of lungs. Perhaps drawing inspiration from John Galliano’s visionary creations, Roseberry uses fabric to design mouths and roses instead of breasts, paying homage to the brand’s heritage in a genuine and innovative way. Schiaparelli boldly claims the right to beauty and fantasy, with a collection that reaffirms that haute couture is not dead.

Giorgio Armani chooses the Hôtel de Boisgelin, home of the Italian Embassy, to present Armani Privé. The designer transforms signs, lines and colours into a new expressive trajectory that goes beyond the sense of time. There is an air of festive lightness where the protagonists are light, the splendour of fabrics that seem liquid, the luminosity of satins and silks coloured in unexpected tones. A luminous flow that accompanies the almost definitive exit from the tunnel, or at least augurs this.

Yuima Nakazato wanted to use his entire repertoire of techniques for his ten-year anniversary, from the ancestral patchworking technique ‘boro’ to his Type-1 seamless assembly system and the textile modelling method ‘biosmocking’ applied to a protein-based biomaterial from Japanese manufacturer Spiber, a technique that is not only about extending the life of a garment, but also avoids the use of virgin materials from animals by using existing materials.

The starting point for his designs was the shape of sound waves. This led him to the idea of whale song, one of the elements included in the gold discs sent by NASA’s Voyager spacecraft as a record of life on Earth. Do you remember Medulla by Bjork?

Same concept but in fashion, extraordinary!

Rectangles in flowing dresses echoed the shapes of waves – water and sound alike – while majestic coats cut from thick wool or leather were assembled using her Type-1 fasteners.

On July 7, 2021, Balenciaga presents the Couture for the first time since 1967, when founder Cristóbal Balenciaga left the fashion industry. Balenciaga Couture Winter 21 is officially the house’s 50th Couture collection and the first by artistic director Demna Gvasalia. The collection is a mix of tailored men’s and women’s pieces meticulously crafted using today’s most sophisticated techniques. Paying homage to and plundering Balenciaga’s archive and venerated couture history.

The garments architecturally transform the body and reference the art of savoir-faire while taking an interest in modern dressing. Contemporary and signature silhouettes are reinterpreted through expert construction and cutting-edge technology, in collaboration with eminent Couture ateliers and manufacturers. These include milliner Philip Treacy; embroidery houses Atelier Jean-Pierre Ollier, Maison Lesage, Maison Lemarié and Atelier Montex; and fabric houses Dormeuil, Jakob Schlaepfer, Taroni and Forster Rohner among others.

Demna wanted to recreate the same atmosphere, no music, an all-encompassing silence, a monastic setting like those that characterised Master Cristobal’s fashion shows. Not only was it forbidden to talk, but you couldn’t even cough or leave the room before the end of the collection. But here there is a difference between the present and the past, as the select and highly educated audience of the time is no longer there.

In her second appointment with the Fendi Couture collection, Kim Jones reads Roman history in the interstices of its layers. And he does so through the insights of Pier Paolo Pasolini.

“Pasolini watched Rome become modern – and this is what interests me: connecting the eras, the old with the new, the past with the present,” Jones writes in the notes for the collection presented with a film that Luca Guadagnino shot in a set that echoes the architectural squares of the Palazzo della Civiltà Italiana, Fendi’s headquarters. “Rome is a fascinating city because it has so many pasts, and I was drawn to Pasolini because I have always been inspired by his vision of the world,” reflects Jones, who then mixes eras and overlaps them, vivisects them and brings them together, sublimating them in shapes and volumes, materials and workmanship.

John Galliano on the making of his Maison Margiela Arstisanal collection, which he scripted in the epic film, A Folk Horror Tale, which had its premiere in a Paris cinema . The commentary seemed emblematic. A romantic and mysteriously disturbing struggle with the elements was on Galliano’s mind as he designed and created clothes and moving images with Oscar-winning French director-producer Olivier Dahan.

Galliano has always been a storyteller, but this is probably the most personal of all the collections he has done for the Artisanal line. The collection is a triumph as driven by emotion, like a tree Galliano has reunited with his roots. He worked the fabrics, treating them with enzyme washes and stone-washing to remove colour; shrinking and wringing them in a technique he calls “Essorage”, a methodology that seems to be the complete opposite of the traditional formalities of haute couture, surely it is a break.

Garments graded six or 12 times, and then shrunk to fit. The linings of skirts and suits were turned inside out and converted into dresses. He attached denim jackets and loden coats and a 19th-century woman’s corset jacket. He created a blue and white patchwork coat made from pieces from a charity shop. Designs of Delft tiles were crocheted together in a jumper. Artist Celia Pym darned a typical Gansey, the original jumper of English, Welsh and Scottish fishermen, with pieces of newspaper about the death of King George V.

It is as if John Galliano has gone back to rediscover his primitive and visceral strength of the rebel pirate he has been from the beginning.