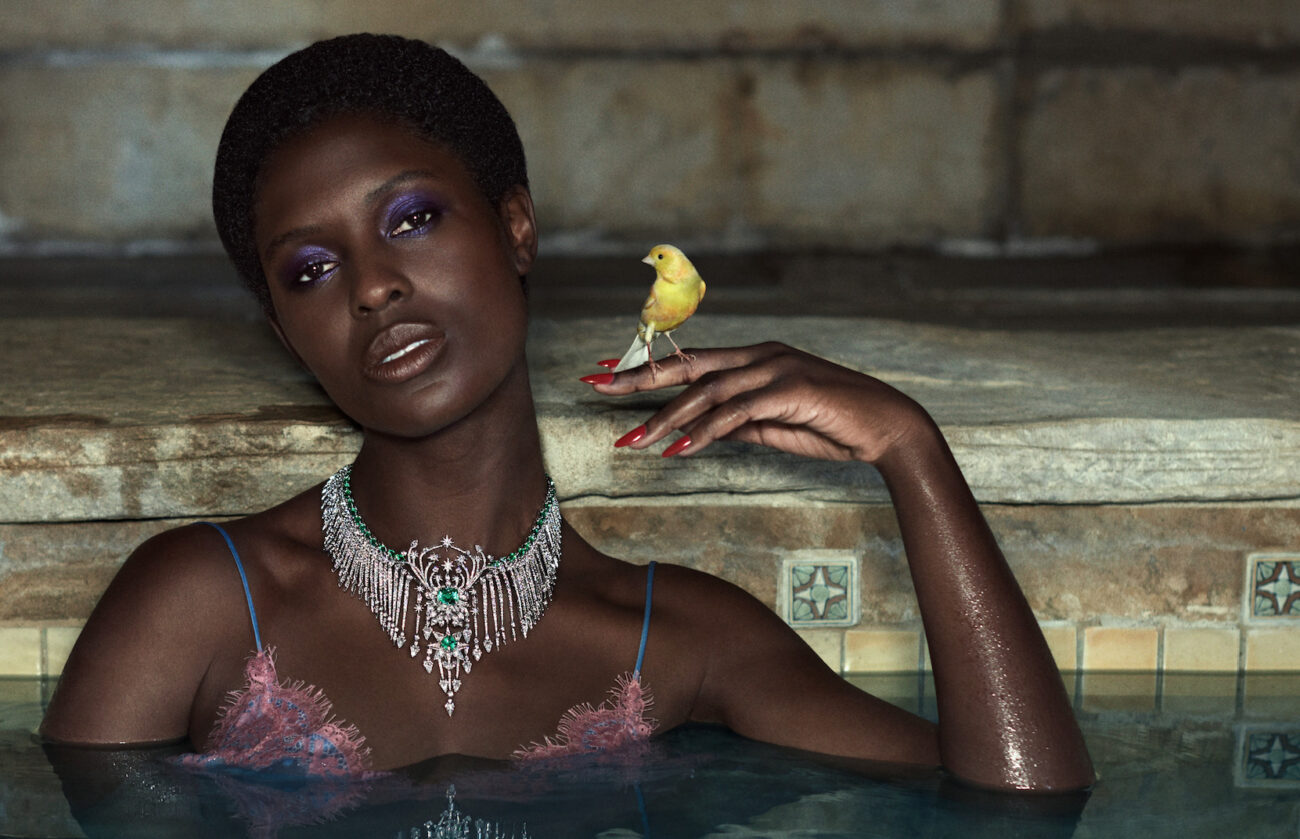 HORTUS DELICIARUM — which translates from Latin as ‘Garden of Delights’ — the first encyclopaedia written by a woman, was the work of Herrad von Landsberg, who, between 1167 and 1195, was abbess of Hohenbourg Abbey in Alsace. The encyclopaedic work, of singular and exceptional value, was written by her around 1175 or soon after. Written in Latin, it summarised the theological and profane knowledge of the time. Erudite is the inspirational link, which reconfirms Alessandro Michele‘s visionary eclecticism in the symbols and iconography that make up his aesthetic universe. The last part of Herrad von Landsberg’s manuscript tells of a physical space where the bliss of the Chosen is located and the new heaven and new earth, which is full of spring flowers. The choice of location, Villa Pallavicino, a private residence on the Stresa lakefront surrounded by an 18-hectare park, could not have been more appropriate. Gucci presented its second High Jewelry Collection by Alessandro Michele.

The advertising campaign for the collection, shot by Glen Luchford, stars Jodie Turner-Smith. In an atmosphere that evokes the glamour of a mystical and vicious Hollywood, the actress is portrayed through a sparkling series of images and a video, wearing some of the most significant pieces, immersed at night in a sumptuous pool. She is in the company of a colourful snake and bird.

The collection comprises more than 130 pieces, largely one of a kind, and its motifs are divided into 4 chapters informed by the majestic beauty of the natural world.

The first chapter is an ode to the majestic beauty of natural landscapes, recreating the great outdoors as preciously intimate talismans. Monumental natural features, such as waterfalls and softly windblown forestry, are recreated in miniature; in jewels that are delicate and romantic. Cascades of diamonds evoke sparkling torrents of a waterfall, while quivering en tremblant Victoriana leaves and stars evoke shooting meteors and the delicate harmony of Mother Nature. Here, fringes embody a sense of spellbinding movement and ornateness, much like star-crossed skies. Not seen since in such splendour since the Roaring Twenties exactly a century ago, Alessandro has heralded the return of fringed and tasselled necklaces and chandelier earrings with a distinctly new context a century on. An array of violet and plum-col- oured spinels float tonally amidst dangling drops of diamonds, whilst lagoon like Paraiba tourmalines are used to evoke the bright azure of the ocean. Dazzling necklaces are especially bold and unequivocal, like the bibbed, spinel-dotted explosion of diamonds that is just as mesmeric as the Aurora Boreali, or a 6.13-carat emerald parure is as vividly green as a springtime leaf, set amidst a constellation of diamond stars that dance centre stage, as if they were being orbited in a spectacular, shiny solar system.

The saturated, hypnotic hues of a sky at sunset informs the second chapter of the collection, which immortalises the fleeting magic of nightfall. Here, styles borrow from the highly romantic — perhaps even gothic — bygone settings of the nine- teenth-century, voluptuously wallowing in the past while remaining resolutely modern, courtesy of bold new settings and highly unique gemstones. Here, opals and topazes sit alongside spessartite garnets and tourmalines in a skyscape of rich, warm colours on a breathtaking Georgiana collet-set Rivière necklace with a 8-carat opal is set with twilight-hued gemstones in what Michele describes as “discordant symmetry”, elegantly ever so slightly mismatched to channel the transcendent ephemerality of a sky’s quickly changing colours as it passes from day to night, whilst distorting and disrupting traditional classicism.

In the third chapter of ‘Hortus Deliciarum’, the romanticism of a rose garden forms the foundation for the most delicate and feminine narrative yet. Rococo bows and talismanic sautoirs pay homage to the poetic universe of botanicals, so frequently associated as a symbol of renewal and love. For this, each gemstone has been fastidiously chosen for its delicate, light colour, like the sunset-hued pinkish-orange Padparadscha sapphire, which resembles a rose petal on the cusp of blooming, or the deep indigo of the indicolite tourmalines, as inky as a night sky. Some necklaces are designed with detachable pendants to be worn as a personally-chosen auspicious charms — or the dazzling array of brooches, allowing the wearer to create a bouquet of jewels to wreathe the décolletage. Flora and fauna, as well as the breathtaking landscapes they inhabit, are brought to life by unique gemstones — each of them a precious talisman of the big, bold natural world.

The fourth chapter mentions wildlife, summed up by the head of a lion, the symbol of Gucci. Yellow gold is the protagonist here, accentuated by sunny beryl. Solitaires are redefined with a maximalist perspective. Clear, concrete, suspended between firmness and identity. Coloured emerald-cut stones flank diamonds set like antique jewels. The rainbow of reflections is strong, intense and optimistic: mint green tourmalines, sunset pink rubellites, velvety purple tanzanites, orange sapphires, light pink topazes and tangerine garnets. When you look at them carefully, the rings have serpentine curves, each central stone chosen for its rarity, such as the 60-carat rubellite, the heart-shaped mandarin garnet, and the 16-carat Paraiba tourmaline.

In essence, Gucci’s “hortus” of jewels is inhabited by magical beasts and flowering with totemic symbols of nature, distilling the poetry of the past with the beauty of the present. Each piece evokes the inherent splendour of Mother Nature, Gucci’s ultimate muse — and the reassuringly universal beauty of the sky. The collection is fantastical interpretation of the wonders of the natural world, and the meditative reflectiveness with which it grounds us. Sky-high jewels, otherworldly settings, natural inspiration.