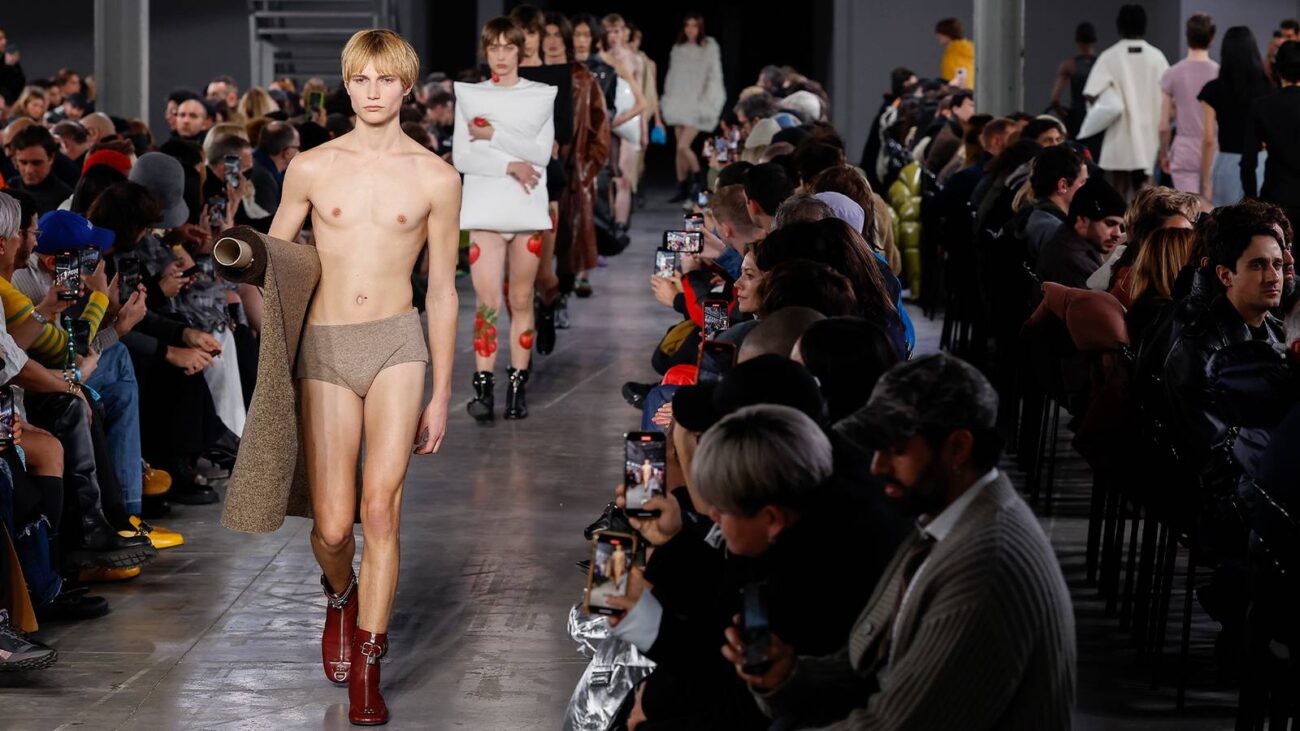 From the austerity of Prada, to the absence of all ornamentation at Gucci, to a return to the essence for JW Anderson, Men’s Fashion Week F/W 2023 appears to be an extreme attempt to flatten tastes and desires in the name of sellable innovations that all turn towards sobriety, minimalism, and clean design

Accompanied by a soaring soundtrack composed by Italian pianist Ludovico Einaudi, Giorgio Armani’s latest collection – shown at the house’s headquarters – drew inspiration from traditional Milanese architecture. In particular, the atriums and courtyards of the city’s palazzos – ‘atriums that hide gardens, spaces designed with discreet geometry in white and coloured marble’. As such, the colour and texture of marble was echoed in a rich array of fabrications – cashmere, alpaca, velvet and silk among them – many of which featured designs evocative of zig-zagging floor or wall tiles. Diaphanous silhouettes and softly structured tailoring in rock-like shades of grey and beige, meanwhile, recalled Milanese statuary. ‘A nod to the age of elegance, that, while partially forgotten, echoes in the elegant spirit of this city,’ said the house.

In recent seasons, Miuccia Prada and Raf Simons have been drawn to simplicity, looking back to the ‘fundamentals of fashion’, stripping garments of complication and translating archetypal forms for the realities of living today. Those explorations continued this season with a collection titled ‘Let’s Talk About Clothes’, which sought to oppose a feeling of ‘reduction and simplicity’ with moments of softness – ‘comfort, exaggeration and intimacy’.

This juxtaposition was reflected in the Fondazione Prada’s Deposito show space, which was transformed into a low-ceilinged, bunker-like space, the only marks of decoration being hazard-orange columns that ran up the outer walls. As the show began – opening with a stream of minimal, single-breasted tailoring from which colourful pointed collars emerged – the ceiling slowly rose, revealing vast art deco chandeliers at full height. It seemed to speak of an opposition between minimalism and decoration, but also volume – how one shape can become another, ‘that proportion can transform perception’, as the notes described.

As such, the narrow tailoring gave way to more expansive silhouettes, their forms signifying protection and comfort – whether an optic white protective vest, a bulbous take on the bomber jacket (stripped of ornamentation and hardware), or a padded top evocative of the cushions which the house sent as invitations. Miuccia Prada said these pieces were a response to the realities of living today: ‘It is a complicated moment in the world – and we react to it,’ she said. ‘The most honest thing we can do is to create something useful for people today – to face reality in, and frame the idea of our reality through clothes. We want to create fashion with a significance and a meaning – that is the value of fashion today.’

Simons added that this collection was also about the ‘DNA of Prada… clothes embedded with fragments of an identity we can recognise as fundamentally Prada.’ Indeed, those familiar with the house’s archive could pick out traces of previous collections from the house in its details – making something of a return to Prada’s foundations. ‘These are unmistakable and significant gestures,’ Simons continued, ‘towards the heritage and history of the brand, and to the meaning of Prada now.’

Stefano Gabbana and Domenico Dolce’s latest collection was a swerve away from the maximalism of recent menswear seasons with a rigorous – and impeccably tailored – collection in shades of black, grey and white. Much like their womenswear collection shown this past September, the designers expressed a desire to get back to the house’s codes, Dolce & Gabbana’s ‘essence’ – here arriving in sensual tailoring, much of it double-breasted and lightly cinched at the waist, corsetry-inspired cummerbunds, and moments of sheerness and exposure in a celebration of the body. Despite the clarity of the silhouette, flourishes of glamour and embellishment remained, from delicate beaded and crystal flowers to swathes of sequins – a demonstration of Dolce & Gabbana’s feats of Italian construction and craft.

Matthew M Williams looked towards American artist Mark Flood – known for punk-inspired pastiches of American culture and the contemporary art world – for his A/W 2023 1017 Alyx 9SM collection, with a retrospective of Flood’s work at Milan’s Spazio Maiocchi gallery providing the show’s backdrop. Flood’s slogans and works also appeared throughout the collection in a series of collaborative pieces – some motifs were created for the show, others existing – which added a visual richness to Williams‘ severe brand of minimalism. The influence of technical sportswear remained strong, with Alyx-emblazoned running gear worn over jeans or tailored trousers, while a streak of rebellion came in flourishes of studs and thorn-like spikes, appearing on the knee of a leather trouser, on the toe of a boot, or around the neckline of an otherwise unembellished floor-length halter dress.

The show began in a teenage boy’s bedroom – complete with rumpled bed sheets and walls tacked with posters – for an exploration of the rebellious dress codes of youthful archetypes: ‘the geek, the jock, the goth, the emo and the femme’. ‘The freedom to be who you want to be,’ said the twins of remaking these stereotypes, playfully amalgamating distinct elements of Y2K dress – trucker caps, low-slung torn jeans, tops sliced away to reveal the naval – with irreverent slogans, ‘Choke’, ‘24-7 Star’, ‘Recycled Teenager’, and ‘Livin’ Doll’ emblazoned throughout. Models, including an array of TikTok stars and social-media personalities, walked the runway with Campbell-inspired panache – ‘full Dsquared2 energy’, as the notes described.

Jonathan Anderson’s sophomore show in Milan – having shifted his menswear to the city this past June – began with an underwear-clad model carrying a roll of fabric. ‘Clothing stripped down to where it all starts,’ read the collection notes, which spoke of Anderson’s desire to return to a ‘blank slate’, ‘reducing, compressing, and condensing, with a certain crudeness and definite blankness’. It lent the collection a visual starkness; in several of the looks models would wear just a single garment, like a fuzzy sweater or a pair of pants, and nothing else (‘no fuss, no extra, no more… everything is what it is, and that’s it’). ‘I think we’re going to head into a season of reduction and stripping things back,’ the designer noted backstage, an observation which was echoed by Miuccia Prada and Raf Simons who had a similarly reductionist approach to their Prada menswear show earlier in the day. As such, several of the garments worked from archetypes: a duffle coat (here fastened with BDSM-like buckles), a trench (left raw at the edges), or a pair of shorts (frilled at the hem, reminiscent of those shown in his breakout A/W 2013 collection). If it was a diversion from the surrealism of his recent collections, moments of satisfying strangeness remained, whether a single pillow held to the chest or the frog-shaped footwear, created in collaboration with children’s shoe producer Wellipets. Anderson noted that he had wanted to work with them for several seasons; prior to the show they appeared in a number of teaser images on the designer’s Instagram. ‘There’s something about them that reminds me of my childhood, they were such a thing to have,’ he said. ‘It’s the only surreal moment in the collection; they’re almost like a cassette player – an icon of design.’

Anticipation was high for Gucci’s A/W 2023 collection, which marked the first since the departure of creative director Alessandro Michele in November 2022. Presented in the round – in the centre, American noise-rock trio Marc Ribot’s Ceramic Dog provided the live soundtrack – the house said the collection centred on the idea of ‘improvisation as methodology’, an apt metaphor for an in-house team, sans creative leadership, attempting to define a new chapter of the historic house in mere months. Initially, the collection felt something of a return to Michele’s earliest collections at the house – hinted by the reappearance of the fur-lined backless loafer, one of the designer’s first cult pieces – with languid tailoring, oversized overcoats, and romantic oversized silk shirts, delicately ruffled at the collar and cuffs. As the collection went on, these ideas evolved in new directions – a nod, the house said, to the ‘multi-faceted creatives and craftsmen that make up the house of Gucci’ – which spanned nods to Tom Ford’s Gucci tenure (denim jeans tied with stacks of silk scarfs, T-shirts slashed to the naval, crystal-studded denim) to colourful oversized boiler suits and Motocross pants, to dancewear-inspired leg warms, ribbed-knit trousers and wide boat-neck sweaters. The suggestion was a more discreet vision of luxury for the house, though what comes next is anybody’s guess – Michele, of course, was picked from the in-house team. Perhaps the next creative director of house is already waiting in the wings.