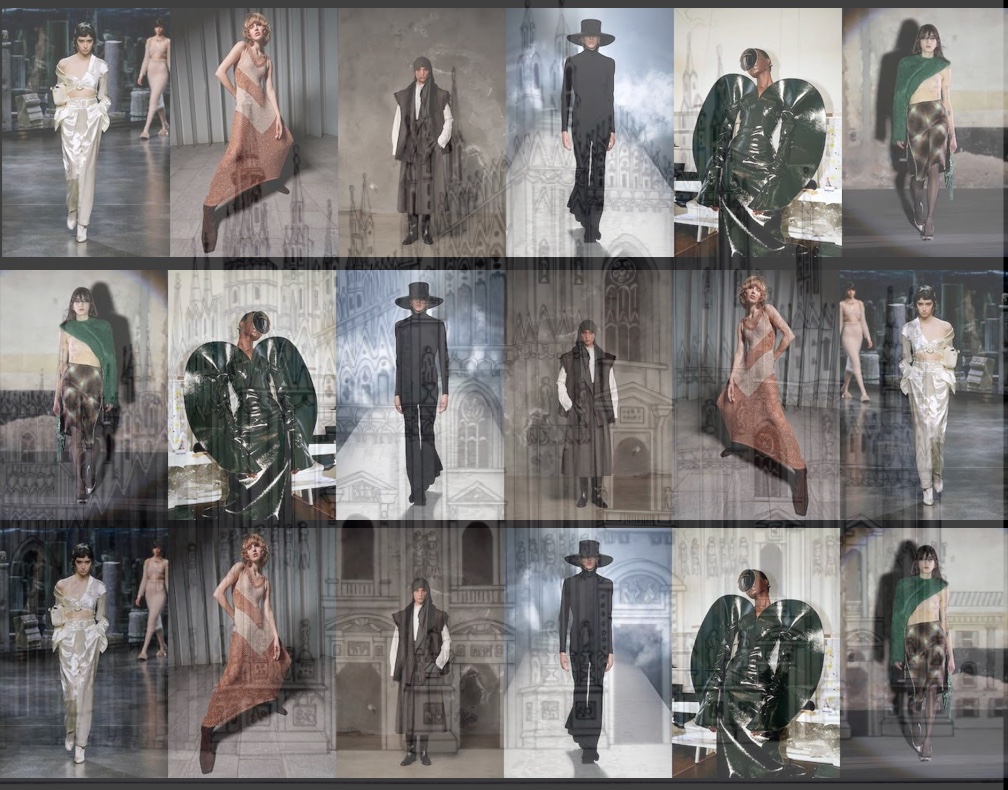 Milano Digital Fashion Week Women’s Collection/Fall Winter 2021-2022  started with a dutiful tribute to Beppe Modenese, the former president of Camera Nazionale Della Moda Italiana, who passed away last November. Without Modenese, Milano Fashion Week would never have existed and never been considered one of the most influential fashion events in the world.

Right after the tribute, Gisèle Claudia Ntsama, Fabiola Manirakiza, Karim Daoudi, Joy Meribe, and Mokodu Fall, also known as the Black Lives Matter in Italian Fashion collective, took over the stage with a digital presentation titled WE ARE MADE IN ITALY. The project, which was firmly supported by Haitian-Italian designer Stella Jean, marked a historic moment for the future of the fashion industry as a whole. As a matter of fact, it was the first time ever that The Camera Della Moda Nazionale Italiana welcomed the incredible creations of up to five BIPOC designers in its FW-dedicated calendar. Having the anti-racist stance as their common thread, the collections presented in this morning’s digital runway served as a battle cry for everyone fighting against systematic violence and racism directed at people of colour.

The first brand to show was Missoni, which showcased the short film “Look Right Through Me,” directed by filmmaker Lorenzo Gironi. In the film, models moved quickly from a bowling alley to empty school desks, eventually finding themselves in a women’s-only club. All things and situations that, unfortunately, coronavirus has made it impossible to experience nowadays. Characterised by an almost Brechtian essence, the scenography was composed of just a few elements, mainly Chinese boxes, to escape verisimilitude and the notion of space in its most general sense. A vivid example of that is the bar, whose premises are defined by nothing else but a sign. The dresses and knitwear collection presented in the digital presentation play with the traditional codes of the Maison – ranging from the characteristic zigzag designs to striped, flaming, and wavy silhouettes which feature unusual colour combinations. For this occasion, Angela Missoni included a beautiful tribute: in one of the scenes of the short film, a model dances in front of another model as she films her while the lights thicken; thus revamping an involuntary nude look like the one that scandalized audiences on the historic 1967 catwalk held at Palazzo Pitti. A wonderful moment!

At Calcaterra’s, the atmosphere bordered on the monastic: with headdresses recalling the cloistered world and concrete used as a framework for the show, in a collection that channels tangible austerity. Respecting the religious silence permeating the runway, the Maison did not make a sound; yet, Calcaterra succeeded in creating utterly timeless dresses through an unusual peacefulness. It is safe to say that the designer is a master at orchestrating fabric, a collection as if it were a symphony. In his FW 21 collection, coats and elongated jackets stripped of any superfluous detail were worn over shirts, while straight skirts and trousers skimming the floor were paired with riding boots.

Alberta Ferretti said it loud and clear: there’s no more time for sugar and romanticism in 2021. The woman Ferretti presented to the international fashion audience appeared to be smart, self-confident, but mostly shrewd – as confirmed by the refined broadband hat strategically hiding some of the model’s faces. With black dominating most of the collection, Alberta Ferretti dared to leave room for casual touches of gold and iridescent tones. The designer’s Fall-Winter 21-22 collection also dared to play with leather, faux fur, vinyl, and sharp tailoring. Featuring a femme-fatal woman gifted with perverse, subjugating charm and extraordinary physical vitality, the Maison seemed to draw inspiration from Elena Muti’s character in Gabriele D’Annunzio’s “Pleasure” – a personality capable of reducing to enslavement even the most devoted aesthetes.

In Fendi‘s digital runway, Creative Director Kim Jones brought new life to the Maison’s decade-long heritage through the revamp of gorgeous furs, double cashmere, and camel outerwear: namely, the flagship of the Italian fashion house. Revisiting Fendi’s established key codes, Jones celebrated the evolution of femininity in what could be seen as a tribute to Italian elegance. From draped shirts and dresses to meticulously designed wool tailoring, the fashion brand distinguished itself by honouring women’s inspiring determination in a captivating show that spotlighted their timeless charm. The digital presentation immersed spectators into a futuristic world where gender roles and pre-conceived norms are washed away in the wake of a new era. Relying on a spectacular setting resembling the Roman Forum, the Creative Director broke the silence with “She is him, He is her, identity doesn’t exist.” A manifesto that turned him into the protagonist of an “Oratio” on the genderless nature of what’s yet to come. Through a play of looking-glasses providing the public with a 360°, almost reflective view of the models of the show, Fendi challenged the public with a message that – combined with the brand’s incomparable sophistication – left the fashion community breathless.

At N21, Alessandro Dell’Acqua explored eroticism as an answer. The designer presented a collection whose cornerstone was represented by underwear, where we saw organza bras gently caressing women’s breasts in an almost voyeuristic manner. Inspired by Carlo Mollino’s “sinful” Polaroids, the collection featured stockings caught underneath short, retro skirts, oversized necklines, and mini dresses alternating in a harmonious, continuous play of volumes that gave continuity to the entire collection. Overall, Dell’Acqua played with the ubiquitous style codes that have distinguished him from the rest – lace, pencil skirts, and knitwear.

One thing’s for sure, Daniel Del Core’s debut on the Milanese runway indeed confirmed that he is someone we must keep an eye on. His FW 21 Collection proved an interest in the authenticity of craft, making his talent stand out from the crowd. However, if the designer intended to draw inspiration from Pierre Cardin’s iconic style – as hinted by the use of extravagant sunglasses worn by models throughout the collection – he did not quite succeed in his mission. Playing with various volumes, textures, and colourways, Del Core’s collection had incredible potential. However, what lacked today was an equally powerful narrative capable of turning his creations into a cohesive piece of work.

Lastly, Brunello Cucinelli his collection streaming from the Umbrian village of Solomeo. Cucinelli presented a new daywear collection, characterized by a minimalistic and refined style that stays true to the Maison’s tradition. Overall, it made a clear and strong statement, highlighted by the designer’s use of noble and technological materials. Combining sustainability with the effortless elegance typical of the Umbria-based fashion house, Brunello Cucinelli FW 21 collection goes back to the basics setting the premises for a future free from unnecessary waste.

And finally, the BODIES