sTREETWEAR MEETS THE pRINCE OF PRINTS 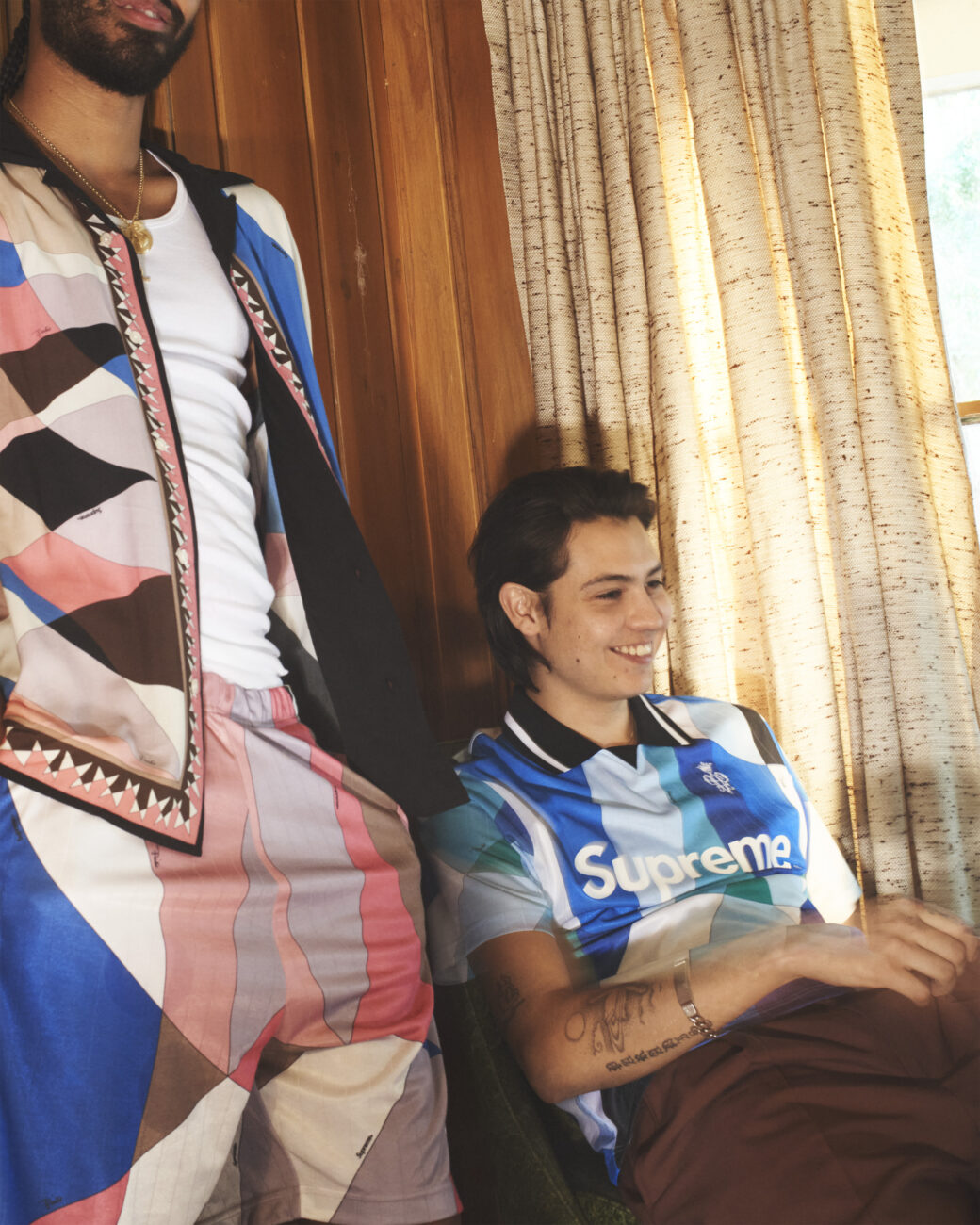 For spring 2021, Emilio Pucci has partnered with Supreme to create a brand new collection of 14 pieces featuring its archive prints

Everytime Supreme announces a collaboration the consumer expectations rise through the roof. And when the leaks reveal that a box logo, the streetwear fanatics holy gem, is on the way, the hype surrounding it skyrockets. This is exactly what happened this week, when the New York skater brand founded by James Jebbia confirmed it is going to release a small capsule collection, in collaboration with a very famous Italian brand.

About one month ago, the brand Supreme hit the headlines for the opening of its new flagship store in Milan. While it seems very probable that the decision of a new store in Italy is a direct consequence of the legal battle with the infamous Supreme Italia, we must admit that the box logo celebrating the opening – with The Last Supper by Leonardo da Vinci on the background – was one of the best in years. Now, it looks like Supreme wants to reinforce this correspondence of amorous senses – as the Italian romantic poet Ugo Foscolo would have said – with Italy. In fact, this week’s collaboration is with a brand named after a pioneer of the Italian taste: Emilio Pucci.

Emilio Pucci was born in 1914 to a noble family of Florence. He studied in the United States, where he trained as a skier, and he designed his first ski suits. Decorated with several medals of valour during the Second World War, he came back to Florence, where he randomly lunched his career in fashion. As a matter of fact, in 1947 a picture with a «dashing gentleman» wearing a modern ski suits created by Pucci was published on “Harper’s Bazaar”. It was an instant hit. Within a couple of years Emilio Pucci became one of the most important figures of the emerging Italian fashion, on a par with Germana Marucelli, Roberto Capucci and the Fontana sisters. In 1950 he opened his first boutique in Capri, focusing on resort and sportswear clothing, immediately loved by American buyers. He helped developing a new sense of taste, sophisticated but cozy, characterised by an innovative mix of modern and colourful patterns and an unmistakable Italian charme. Prints and comfort are the ingredients that will mark his success, and, together, that of the new moda boutique, the Italian alternative to the haute couture. With him, the Italian way of life (and dressing) is ready to set the rules for the following decades, until the success of the Made in Italy and Italian Style later in the ‘80s.

The polychromatic and kaleidoscopic prints have always been the real hallmark of Emilio Pucci, that was nicknamed “The Prince of Prints” for a reason. And prints are also the protagonist of this collaboration with Supreme. In fact, the American brand used two prints taken from the Emilio Pucci archive – the Tulipani pattern, dated 1965, and the Fantasia pattern, from the 1970 – to give a new look to its clothes. The collection, over the box logo tees, includes, among other things, a sport jacket, a hooded sweatshirt, some shorts and sweatpants. And, of course, short and long sleeves shirts and a smoking jacket, probably the most stupendous piece of the collection, because it really resembles the casual allure of the iconic Emilio Pucci creations of the ‘50s.

Maybe it is not a case that, just landed on Italian area, Supreme decided to collaborate with such an historical brand as Emilio Pucci. After the Second World War, Emilio Pucci exported his sportwear and casual creations overseas, taking the heart and the wallets of the American bourgeoisie. Nowadays, with an operation that lays between the romantic and the cynical, Supreme tries to give new life to the magical and timeless Italian imaginary.

Maybe, just a way of selling us Italy back, waiting to the next bogo.

MFW: TURnING THE WoRLD UPSIdE DOwN

HOW To BE a SKiNGiRL