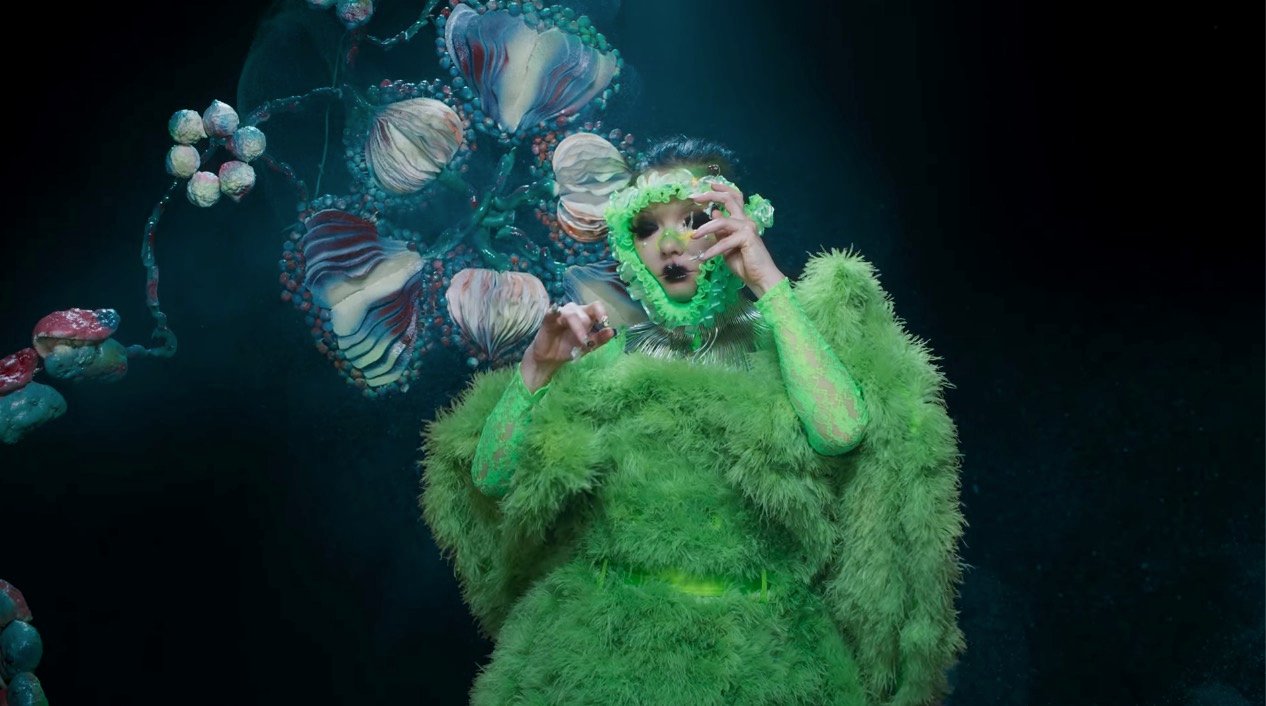 A first view to the fossorial world of Björk, the queer mother who takes us underground to the sound of clarinets and gabber beats

With Atopos, the lead single from Fossora, Björk has finally landed on planet Earth. After the hell of Vulnicura and the paradise of Utopia, another experience seems to have forged the Icelandic singer’s imaginary. As she stated on her new podcast series, “most of us go through phases that take roughly 3 years, and it is not a coincidence this is also how long it takes to make an album.”

In the past three years, marked by the pandemic, Björk found the way home and literally put her root in the ground. The triggering event was maybe her mother’s death, happened in 2018, which will be one of the main themes of the album. So it’s not a case that the more insistent figure in Fossora is the soil, and that the album title stands for the feminine version of the Latin word “fossor”, which in short means “she who digs” (into the ground). Here then this matriarch digger who drives us into her underground world, characterised by mushrooms, mycelia, rocks, strange flowers and plants. It is a planet that could scare the listener and result disturbing because of its oddity. But one of Björk’s biggest skills is to make us change point of view and appreciate also the most sinister part of nature and of ourselves, as a present to explore.

We can find all of this in the first single “Atopos” already, which was defined as Fossora’s passport. The lyric could result apparently conventional, but actually it is studded with cultured references that makes Björk’s thought unique. The title itself is inspired by the socratic concept of love, discovered through a Roland Barthes’ essay: “The other whom I love and who fascinates me is atopos”, a person who is different from the others and does not tolerate any comparison. So Björk embroidered this “interrogation lyric” where she looks for a connection with her partner and where the differences are a way to “grow outwards towards love”, to “learn” and “find our resonance.” Love is proposed as sentiment, or even an event such strong that it prevails over the lovers’ personality, allowing them to unite despite their trubles. Therefore the song becomes a hymn which invites to exceed the fear of the other and to exercise hope as “a muscle”: “Our union is stronger than us.”

The lyric shows us a mature Björk, who moreover, in her score stories, proved that she has read some psychology books and — talking about her hit “Hyperballad” — mentioned “jungian books about the shadow”, “about how in a relationship you isolate the shadow and deal with it.” This description could maybe fit also “Atopos”, since it appears like a song about universal problems, trying to make the listener reflect and connect with their innermost and subconscious part. As we said, this could be scary, but here comes the most exciting part. The answer? Dive into it and dance.

Sonically, Atopos is an experimental pop and techno song, which reminds of Björk’s most electronic dance tracks, such as Pluto, Wanderlust, Crystalline or Notget. The music video was shot in Iceland in May 2022 by Vidar Logi (a new entry in the Björk’s crew), whose photography is characterised by minimalism and contrasts between warm and cold colours. The film, under Björk’s creative direction and James Merry’s creative consultation, gently make us go underground through close-ups on mushrooms and spores, created by production designer Heimir Sverrisson for Irma Studios, or digitally made by M/M Paris typography.

It looks like Utopia to the nth degree, since these kind of surreal visuals were first experienced with the Cornucopia tour, and hold the futuristic concept of the music videos for “Losss” and “Tabula Rasa”, directed by Tobias Gremmler.

After a few seconds of choir samples, the song unexpectedly starts with the psychedelic rhythm of the refrain. The view moves on the bass clarinet sextet Murmuring, whose members perfectly match the fossorial mood thanks to the makeup, the wigs and the costumes, that recall the playful style of the Volta era — especially the trousers’ oval silhouettes by Harikrishnan, Richard Malone and Paulo Mileu, selected by stylist Edda Gudmundsdottir.
The bass clarinets brilliantly return the concept of earthiness through their cavernous sounds and the wide musical scales, abruptly stopped, trying to breath. The slippery notes are always repeated the same, fusing in a mantra with Björk’s words, and create a melody that turns into a joke when it seems to have touched the most tragic point.

The clarinets pace is confused with the beats played by Kasimyn, from Gabber Modus Operandi, another essential featuring on this album, which makes it properly hardcore and unique in its genre. The outcome is a sort of mysterious dance which recalls the snake charming music.

In the music video, Björk appears in four different scenes. In the low angles, you can notice her dark and enigmatic silhouette that stands on a rock, while clapping in time, clad in a black latex dress with crystal applications and an oval giant hat by Daniel Del Core. It represents her own past, or maybe the unknown part of herself, which manifests itself along with the lowest beats.

In another scene, you can see her platform shoes heavily walking to the rhythm, while entering this underground kingdom, combined with fishnet stockings and a punk black skirt. Indeed the main shot features Björk singing and dancing next to the clarinet sextet and to Kasimyn’s set. She effectively looks like an unidentified subterranean being, flaunting her forked nails by Hugo Kreit and her breast, tight inside the angular silhouettes of a colourful dress by Vanebon. The close-ups are all played on the singer’s confrontational grimaces, whose eyes and mouth emerge from the makeup earthy colours by Hungry and the extravagant wig by Tomihiro Kono.

After the first two stanzas, the hypnotic pattern stops to leave space to Björk’s voice, accompanied by an audio feedback, as if to point out the most important lines of the song: “If my plant doesn’t reach towards you / there’s internal erosion towards all.” This suspension ends with a high note, which demonstrates the singer’s famous vocal extension. The rhythm therefore starts again, syncopated, in search of “resonance” and “connection”. While Björk repeats “hope is a muscle”, the beats and the clarinets alternate with the choir, that like a ghost replicate the same tune in a different tonality. Björk laughs and seems to have fun with this refrain. She appears alone, like inside a painting, in her magnificence, while she conducts the rhythm through her head and her arms. In a green fur by Burberry and with her face surrounded by a curly face mask by Noir Kei Ninomiya, she looks like a queer mother, or a Greek Parca, who watches us arriving in this frightening place, ready to welcome us with an unusual joy.

At the end, the electronic beatings prevail and transform the song into a real rave, where the listeners lose themselves and just have to dance madly at this fossorial chaos. The scenes get confuses, the lights get green, and we would like to be with Björk, there on the dancefloor, like in one of her DJ sets.

bURBERRY AND ITS LATEST rOMANTIC HERO

And finally, the BODIES