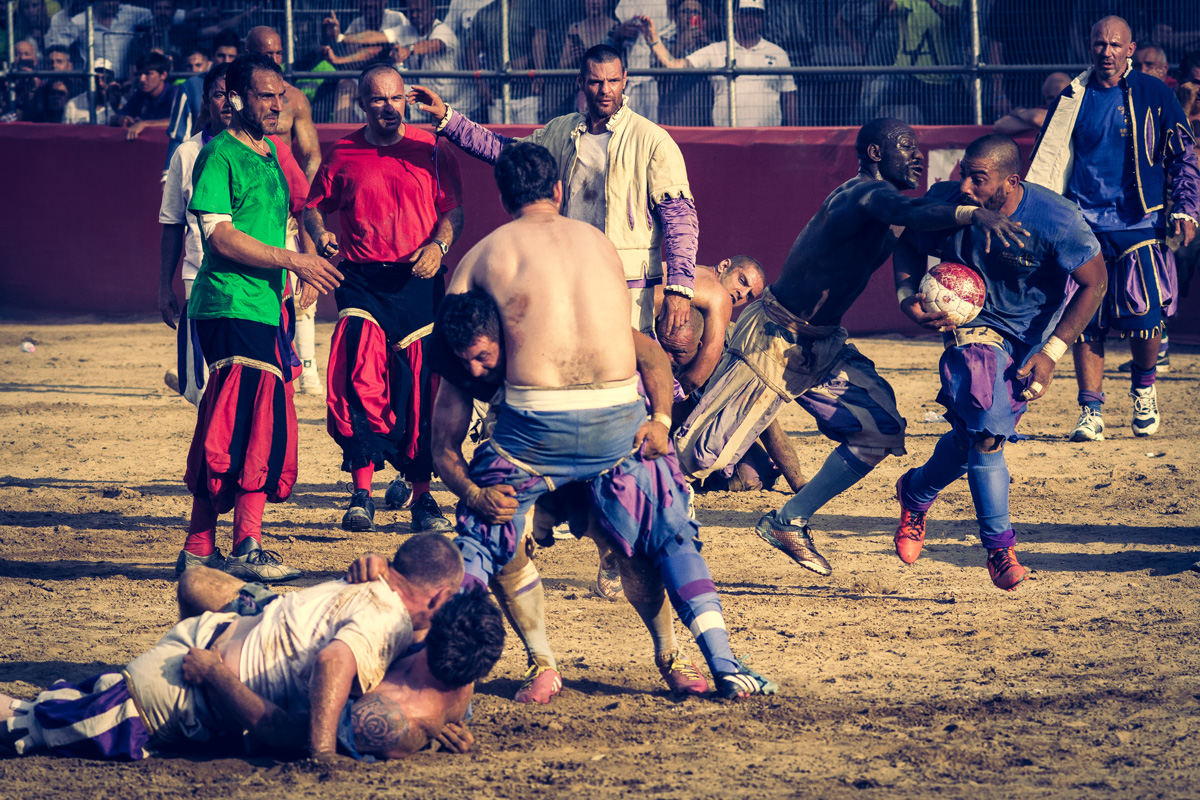 In Siena, Italy, borders aren’t the only factors determining social identity.
For over two millennia, Florence has also offered glimpses of the sometimes spectacular challenges Italians in this corner of the country set up between neighboring districts: welcome to Calcio Storico Fiorentino, or Historical Florentine Football.
Calcio Storico Fiorentino is best described as a blend of rugby, boxing and Greco-Roman wrestling. In practice, it’s a stunning historical reenactment in action, complete with period costumes and very real violence. In the heart of Florence’s Piazza Santa Croce, time seems to come to a standstill. The final is played between the Santo Spirito bianchi, or “whites,” and the Santa Croce azzuri, or “blues,” hailing from two of the four Florentine neighborhoods that traditionally practice this sport. A total fifty-four players (twenty-seven for each team) challenge one another to the rhythm of kicks, powerful punches and gritty wrestling moves.
Thousands of fans fill the historical stadium set up especially for the occasion with color and deafening cries. It’s nearly impossible to secure tickets for the event: this year’s match sold out just eight minutes after the box office opened. In a city besieged by tourists from around the world, there’s no sign of foreigners inside the stadium: this is a quintessentially local event.
All of Florence considers Calcio Storico Fiorentino a rare occasion to celebrate the city’s original identity. “Many players save problems, misunderstandings and arguments they’ve had with others over the course of the previous year for match day,” admits Francesco, a Florentine of Macedonian origin and Calcio Storico Fiorentino expert, “just as the city’s citizens did centuries ago. Once they set foot inside that sandy arena, almost anything goes.” True to the most violent gladiatorial traditions, Calcio Storico Fiorentino becomes an outlet for rancor, disagreements and revenge between different players: an ancient strategy for appeasing the thirst for competition and a desire to reestablish a new balance between rival factions that has thrived here since Roman times.