AROuNd ThE VeNiCE ARCH. BiENnAlE 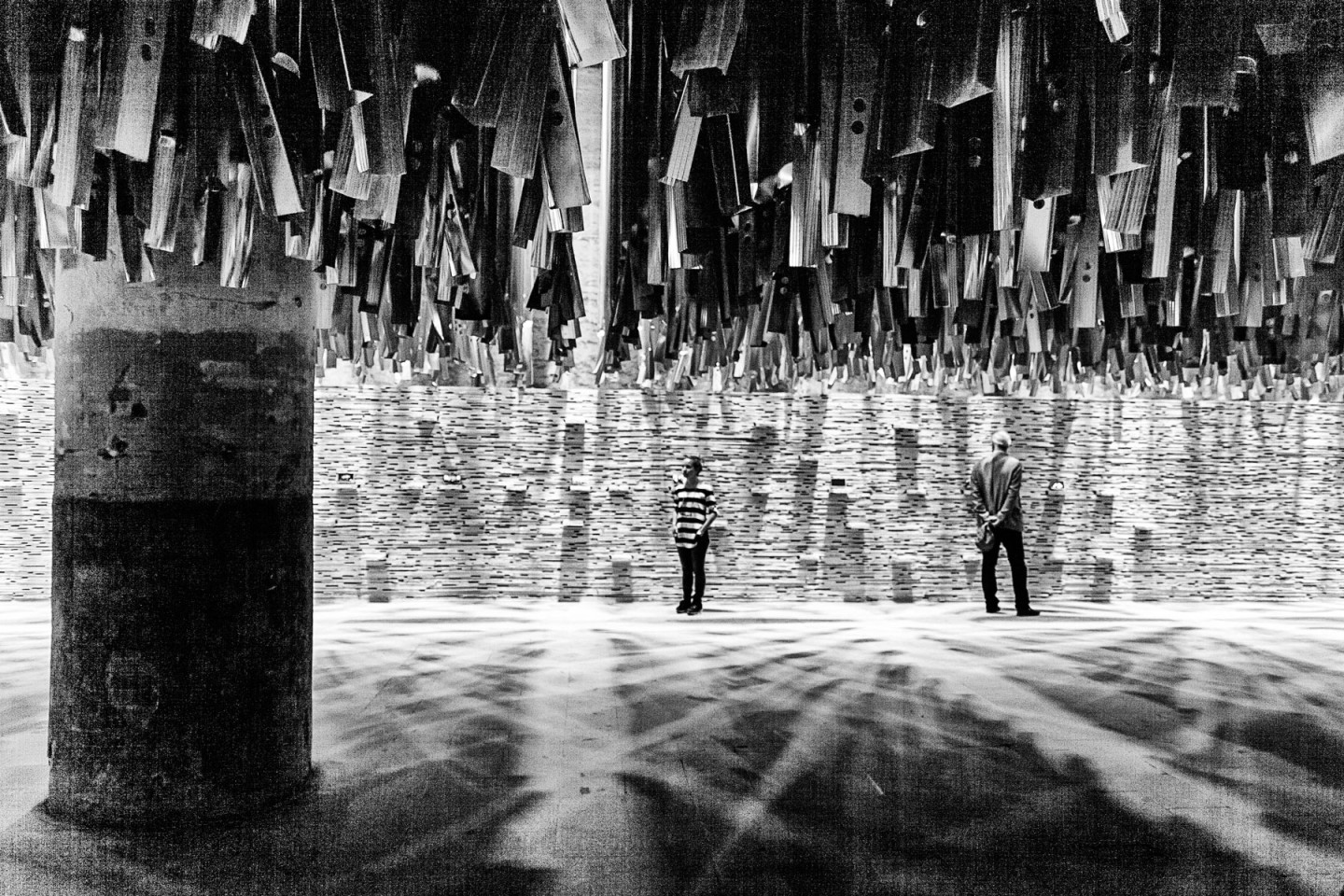 The 15th Architecture Biennale of Venice, curated by Chilean architect Alejandro Aravena, addresses social themes that have an impact on everyone, all over the world. Almost like the coverage of a war, already in the title – “Reporting from the front” – dispatched by architect-correspondents and others, in search of solutions to complex social issues like segregation, inequality, peripheral zones, access to health care, natural disasters, housing shortages, migration, crime, traffic, waste, pollution, community participation.

At the entrance to the Arsenale, “Reporting from the front” states its intentions with an installation-manifesto on sustainability, made with 100 tons of refuse material – 10,000 m2 of plasterboard + 14 km of aluminium bar – from the dismantling of the previous Biennale.

Hundreds of projects from all over the world, at the Arsenale and at the Giardini with the national pavilions, offer a wide overview of the many problems of the world and of how architecture can – to some extent – intervene with innovative solutions.

The focus is above all on Africa, South America and India, and on solutions that get away from the traditional schemes of architecture to address problems on a wider scale.

Examples of “best practices” can be seen in the projects of Francis Kéré in Burkina Faso, of El Equipo Mazzanti in Medellin, Colombia, the work of Kashef Chowdhury/URBANA in Bangladesh to bring quality of life in difficult circumstances, the sustainable architecture of earth, clay and mud of Anna Heringer, Martin Rauch and Andres Lepik, etc. etc.

China is not one of the leading players in this story, except for a marginal role with “People Mountain People Sea – A Celebration of Everyday Life,” the installation by the architecture firm of Liu Jiakun: the model of the West Village Basis Yard, a huge urban complex containing private, commercial and communal spaces, reflects a basic functional approach that goes against the glossy bombast of most contemporary developments in China.

One very interesting section is the one on the “architecture of violence,” with the research project by the NGO Forensic Architecture, presented in 2010 at Goldsmiths, University of London by Eyal Weizman, an Israeli architect and theorist who is one of the most authoritative analysts of the relationship between architecture and conflict, having worked at length on the theme of occupied territories in terms of space, and the related consequences for the population. This is a new practice, an analytical method that investigates political and social developments through constructed spaces, an interpretation of events through material transformations. The studies of Forensic Architecture provide evidence for international investigations, non-governmental organizations and the UN. The goal is to examine ruins and debris produced by drone strikes and other devices, using scans of archaeological sites, videos shot with mobile phones and interviews with eyewitnesses to produce a detailed reconstruction of events from an architectural perspective.

This is an exhibition for sector professionals, above all, without big sets and awesome installations for the general public. Very descriptive and dense with details and information, it requires careful perusal and temporal investment due to the enormous quantity of models, on and off scale, that may thrill architects and designers, but run the risk of overwhelming the average visitor.

As a symbol of his architectural vision, Aravena has chosen a famous photograph by Bruce Chatwin, taken during a trip to South America: the archaeologist Maria Reiche atop a light aluminium ladder, observing the Nazca Lines in the desert. Seen from the ground, the tracings on the terrain make no sense, simply resembling rubble. But from the top of the ladder the same stones form drawings of a bird, a jaguar, a tree or a flower.

“Given the complexity and variety of the challenges to which architecture has to respond,” says Aravena, “we would like the Biennale Architettura 2016 to offer a new point of view like the one Maria Reiche has on the ladder.”

THE PAVILIONS AT THE GARDENS

The Australian pavilion is striking and unexpected, entitled “The Pool: Architecture, Culture and Identity in Australia.” Inside there is indeed an enormous pool in which to wade. In Australian culture the pool is a place, a platform connecting people, a public space where personal and social dimensions intersect. A way to think about the future, about segregation and inclusion, through the factor of water.

Canada has made an installation of great graphic impact, with 100 sacks of mining material at the entrance: a geopolitical manifesto on territorial ecology and the vast mining activity all over our planet. The theme takes its cue from a particular architectural subject, the old gold mine of Furtei, in Sardinia, owned by a Canadian mining company which abandoned the site unexpectedly in 2013, leaving behind dramatic, irreversible toxic effects.

Resilience is a recurring term in many of the projects at this Biennale. It is the key word at the Israel pavilion entitled “LifeObject.” The theme of the exhibition, which opens with a large structure-sculpture base on 3D scanning of a bird’s nest, is the ability of biological systems to recover and adapt, to cope with a shock or a trauma. Resilience is a value of great importance for the geopolitical context of Israel, due to the continuing state of crisis that influences quality of life and the design of spaces. The goal is therefore to create a platform of dialogue between architecture and science as a formative process for the design of the environment.

“Art of Many: The Right to Space” is the title of the contribution of Denmark to this Biennale, with its political focus and range of social themes. It is a tribute to the Danish architects who “create quality for all.” With a high concentration of over 70 projects that demonstrate the humanistic commitment of the designers, what emerges is the image of a country that has always invested in welfare and where architecture has always been seen as a benefit for the community as a whole, rather than for a selected few. Through its narration, the exhibition conveys the vision of coordinated work of architects, urban planners, politicians and developers, with the shared objective of constructing communities and social institutions around people and their needs.