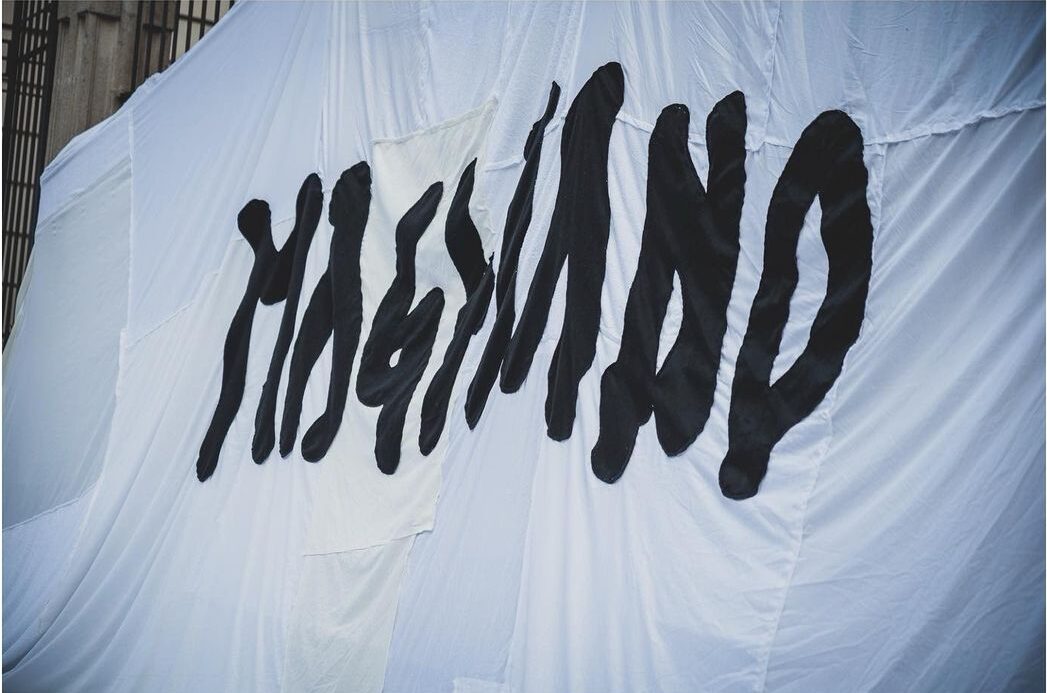 “True gentlemen are like the poor: they eat where they sleep”, said the character of Nadia in the famous film Rocco and His Brothers by Luchino Visconti.

The bed is, metaphorically and physically, the fulcrum around which the entire imaginative machine of Luca Magliano’s 2022/2023 menswear collection revolves. On the outside, a maxi sheet with the Magliano logo welcomes the spectator to the Arci Bellezza cultural association in Milan, while on the inside there is an almost metaphysical setup, charged with social, literary and, above all, cinematographic values. In fact, the gym of the same Arci association was the place where the boxing scenes of Visconti’s film took place.

As Davide Stucchi, the show’s set designer, revealed to us in an interview, this show should be seen as a true fresco of environments. Stucchi felt the need to insert essential lighting to highlight the succession in chapters, each of which gathers the tensions of the previous one and helps the show grow towards the emotional climax, towards catharsis. The first room, where a Bed with white sheets dominates the centre, becomes an allegory of Visconti’s ring, which in turn finds inspiration in Giovanni Testori‘s first series of short stories. In Il Ponte della Ghisolfa, the writer from Novate Milanese narrated with ferocity and desperation the dramas of 1950s Milan, with stories of immigration, prostitution and the betrayed myths of those young people who looked to boxing as a moment of revenge. In the same way, the bedside lamps, as red as the boxers’ blood, are choked by the same electric wire, which deforms them until they become a sculptural metaphor of an uncertain future.

Magliano’s journey continues in a second room – which we might call La Bisca – accessed through curtains with beads created by Stucchi himself. Here the performer Sara Leghissa and the musician Egeeno challenge each other to arm wrestling, in an allegory of the tensions between genders. The concept is important: Magliano, as a signature of his work, while questioning the gender gap, makes us all participants in his performance. It is no coincidence that the models themselves interact with the audience, in a performative dimension that recalls certain practices of experimental theatre.

Magliano’s scenographic universe thus serves to introduce us into a collection in which the gender issue that everyone talks about are put aside, moving into a personal reality in which trends and tired sterotypes have already been surpassed. The bed, then, as a place of intimacy, but also as a ring on which the models climb and on which all the unfulfilled promises of contemporary menswear meet and clash. The subversion of masculine clichés passes through a continuous visual reference to the world of partisan resistance, which also underpins the choice of location, since the Arci Bellezza was the historical headquarters of the Communist Party of South Milan.

The collection ranges from jackets without lapels and with mandarin collars to outerwear and oversized knitwear in muddy hues. Magliano takes the vocabulary of proletarian clothing and hybridizes it with a romantic and dreamlike attitude, which translates into deconstructed oversized volumes and shapes that glide caressing the physiognomy of the male body.

The designer’s desire to connect with an anti-bourgeois and protesting sentiment is clear, in an act of freedom that sounds like a unicum within the current fashion system. Alongside what could be contemporary partisans, Luca Magliano shows models wearing pink silk suits and gold lurex trousers. A reference, it seems, to figures such as those of the neapolitan Femminiello – which today we would perhaps call Queer – who, at the cost of their lives, participated in the resistance only to be disowned by their own political faction.

The show could only be closed by the demential and subversive rock of the Skiantos, who with the song Gelati cry out in a tragicomic key the existential discomfort of an entire generation devastated by the drama of heroin.