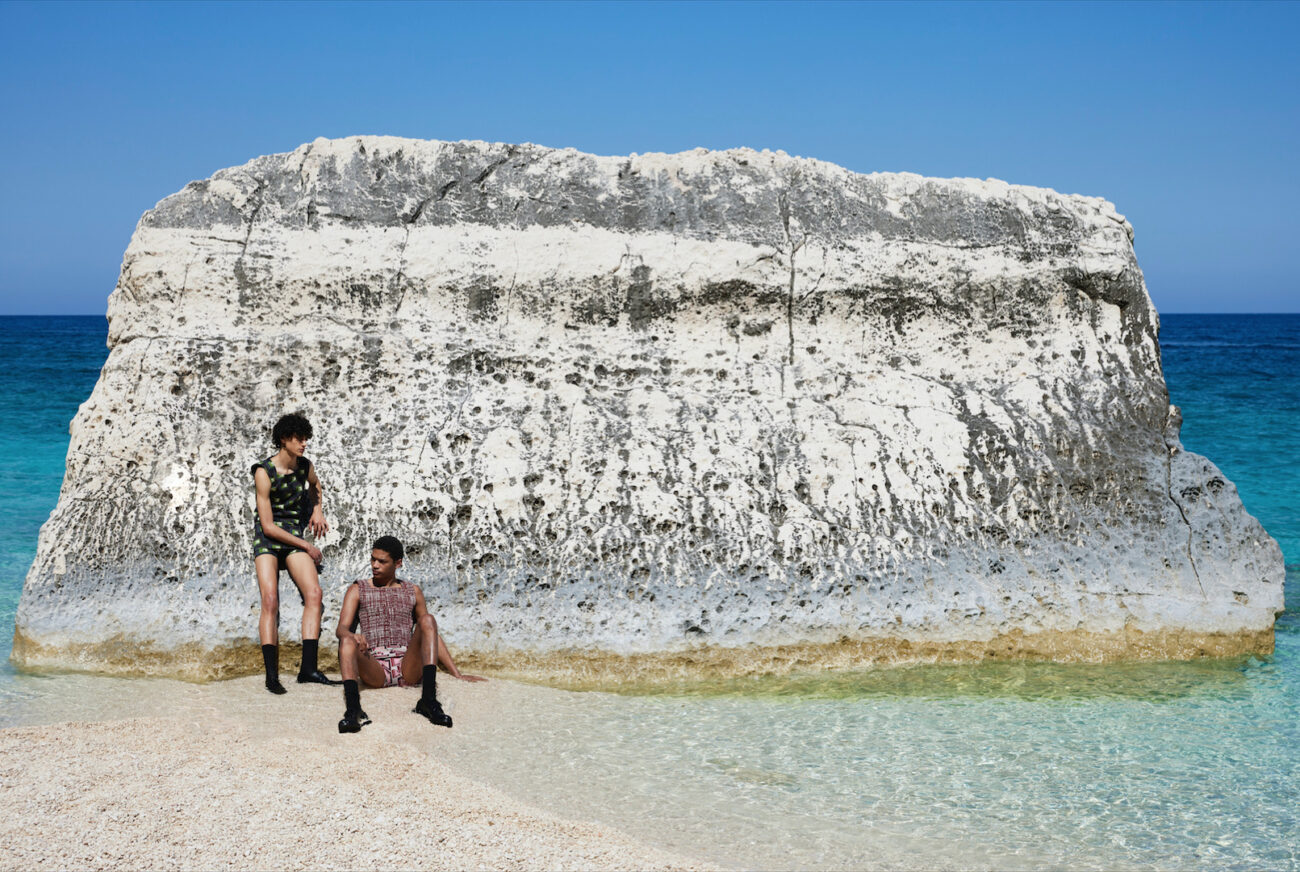 Milan Menswear Fashion Week S/S 2022 came to an end in a context that was, to all intents and purposes, a clear reboot. News and highlights from the shows

After a long time spent imagining what fashion would be after the global pandemic, the Milan Fashion Week is back to give us some clues. This year Milanese week dedicated to menswear was shorter than the normal ones – just four days – but it was crucial to relaunch the fashion imaginary. And if most of collections were presented with digital events, the only three physical catwalks were an invitation to optimism for the future womenswear edition in September anyway.

Alessandro Sartori, the creative director of Ermenegildo Zegna, said «effortlessness is the key», at the end of the online presentation which opened the Milanese four days. For real, the effortlessness seems to be the driving force that guided Sartori creating this collection. In fact, the classic tradition of tailoring is reinvented with grace, with pieces that use a relaxed fit as a strength. A wide range of monochromatic pastel colours loose fit outfits remind us that nowadays man is looking for comfort, but without regretting a modern elegance. And Zegna pieces, with their vintage uniform look, are so proportions oriented and well cut that seem to be perfect for both male and female, because bodies must be the goal over catwalk silly scandals. This time, speaking about something new over the stale reality of the modern menswear will not sound like empty words.

Another novelty is that a colossus like Gucci has renounced to the catwalk this time, preferring an intimate event by invitation only. This press preview was dedicated to the 100th Anniversary Collection, that will be unveiled to the public after summer.

The rebirth of tailoring has been in the air for a couple of years and the present edition of the fashion week probably is the definitive affirmation. Everybody rethink the paradigm of classic man elegance, questioning about what it means to be a human being in 2020s, even before being standardized in a gender.

Canali, for example, take us back to the Californian imaginary of the ‘90s, with suits and jackets ready to be worn by a melancholic modern dapper.

The collection presented by Cucinelli is on the same vibes, elegantly alternating knitted cardigans with a nautical touch with one-and-a-half breasted suits with more marked lines. No big surprise for a brand that has casual elegance as a hallmark.

Fendi, instead, think about youth people who want to live both Roman days and nights with the same innocent eyes. Silvia Venturini Fendi was able to contaminate sartorial forms with casual streetwear vocables with no vulgarity. A wide range of small bags and backpacks stand next to mauve or pale green pieces, which are enriched with several side pockets. Moreover, Fendi’s blazers cut above the navel, with well padded shoulders, are an absolute highlight from this fashion week. In 2022, the Fendi branded man will not be afraid to show his body. What is also worth to mention is that pandemic forced every brand to communicate its work in a different way, mostly through shorts film. This fact has been taken as an opportunity, and the digital presentations we have seen on Camera Nazionale della Moda online site could be considered little gems by themselves. And Fendi short film is a hymn to the heritage of the brand, linked with the city of Rome and with the EUR Palace, for a result that is both poetic and touching.

On the contrary, we are not really persuaded by Tod’s, whose message sounds shouted too loud in a moment when we would need solid relationships with a bit of poetry instead of rhetoric. Walter Chiapponi was able to synthesize his concept of casual Italian allure in some few iconic pieces, like the white canvas rider jacket, the trenches and the desert boots, but the final presentation resembles a certain stereotyped Italianness we cannot share tout court.

The showroom by PT Torino was a stunning surprise. The brand decided to expand its production over pants, and the result is a perfect combination of vintage and urban style. The petroleum knitted polo and the ochre V-neck sweaters are a perfect fit with the baggy style pants, in an atmosphere that could remember the London psychedelic glam rock scenario of the ‘60s and the ‘70s. Nonetheless, a black row cut trench with welded seams balanced the retro inspiration with a boost of minimal contemporaneity. The perfect wardrobe for the new Mods.

The same attention to details and the same view about modern menswear is shared by Kiton, which declines them with a completely different approach, however. A wide collection that embraces all the different shades of colours, ranging from blue to grey, from white to brown, certifies the research that the brand from Arzano did on textiles. Linen, silk, wool and, also, cachemire, are often mixed, to create impalpable blazers and bomber jackets. Apart from the void attempts to forcibly create something new, Kiton choose to work on its identity, deconstructing and rebuilding the classic menswear wardrobe, to constantly reinvent it without distort it.

Domenico Dolce e Stefano Gabbana, on Saturday 19th, were the first Italian fashion creators who come back to catwalk, and they did in a very D&G style. An enormous castle of light was the house of sons of the night dressed in black suits adorned with glitter and strass. The light was what the stylist duo focused on for this collection and the game of colours and reflections had surely a significant visual impact. This triumph of baroque opulence is a stance that follows different paths if compared to the others. That is something. Nevertheless, after the hard times we lived in, it is probably not what we need now. What is there under the surface of an infinite multitude of colours? What over the boxers with the Italian flag printed all over? Clearly, a declaration of love for Italy and an attempt to show that there must be light beyond the darkness of the pandemic. But after months of lockdown maybe simplicity is more than a value, it is an imperative.

Etro chooses a utopian non-place – the dead rails of the former freight yard, lost in the void or open to the possibility of all directions – to set the show, which takes place en plein air in the presence of the public. It is the perfect setting, complete with lovingly tended wild flowers, for a collection that explores the theme of nomadism, central not only to the brand’s aesthetic but also its ethos, taking it in a new, decidedly hedonistic direction. There is also an overt, almost shouted homage to “Maestro” Franco Battiato and his nomadic soul.

At Prada‘s, the beach, rocks and crystal-clear water – Sardinian views, real and wild, with donation included in favour of the Medsea Foundation – are the relief of a wide horizon opening up at the end of a red tunnel, claustrophobic and tortuous like the subway in Gaspard Noah’s Irreversible, travelled at a martial pace and techno rhythm. The accompanying notes speak of a tunnel of joy, but also of the urgency of feelings and the utopia of normality, defining the perimeter of the project while the anaffective coldness that is typical of Prada is pushed back into the corner. Not that the collection, although almost entirely centred around rolled-up shorts, whether in the form of a jumpsuit, swimming shorts or paired with a tailored jacket, exudes sensuality. On the contrary, it has a puerile quality, as if it were designed for a class of children at summer camp.

At MSGM too, the sea, the waves, dunes and beach raves are the stars, bringing back memories of Riccione and the illegal after- parties immediately after Cocoricò, the famous electronic music club on the Romagna coast. Shorts here too, as tanning is rightly still in vogue on the Romagna coast.

Vincenzo Palazzo’s Vìen research on dismembered and reassembled jeans on a white, lunar beach is interesting.

Magliano displays nervous tics, one model twists his mouth, another ‘stretches’ his arms and shoulders in a gesture that has become customary after hours of smart working, while yet another brings his hand to his genitals in a motion that is quite common among men with poor manners. Everything is accompanied by a live performance of distorted percussion. Magliano’s storytelling is something that always takes your breath away, because it never disappoints.

Glenn Martens debuts his first collection as Diesel‘s creative director. An all-embracing collection in which denim is the undisputed soul and power of Renzo Rosso’s brand.

Symbolically closing the fashion week is Giorgio Armani hand in hand with Mr Pantaleo Dell’Orco, who chose to return to Via Borgonuovo for his show, where he presented his work from 1984 to 2000. It is no coincidence that the collection is entitled Ritorno alle origini (Back to the origins). And in those pieces there is Armani at his best. Jackets are deconstructed and the lines are very soft as King Giorgio has always done, but the essence of classical elegance is condensed in garments such as shirts with the same textile of pants and vests worn directly over the skin. The collection also gives space to some chaste geometric prints and colours like bright green or pink, demonstrating how classic does not mean old. All the pieces worn by model, one after another, are an invitation to recollection, to take a meditative pause before returning to the frenzy of daily life. There is a great sense of peace and harmony that confirms how Armani, at 86 years old, is still able to face the present with great awareness. An incredible moving collection that resembles the calm after the storm and allows us to take a sigh of relief, looking serenely to the future that lies ahead.