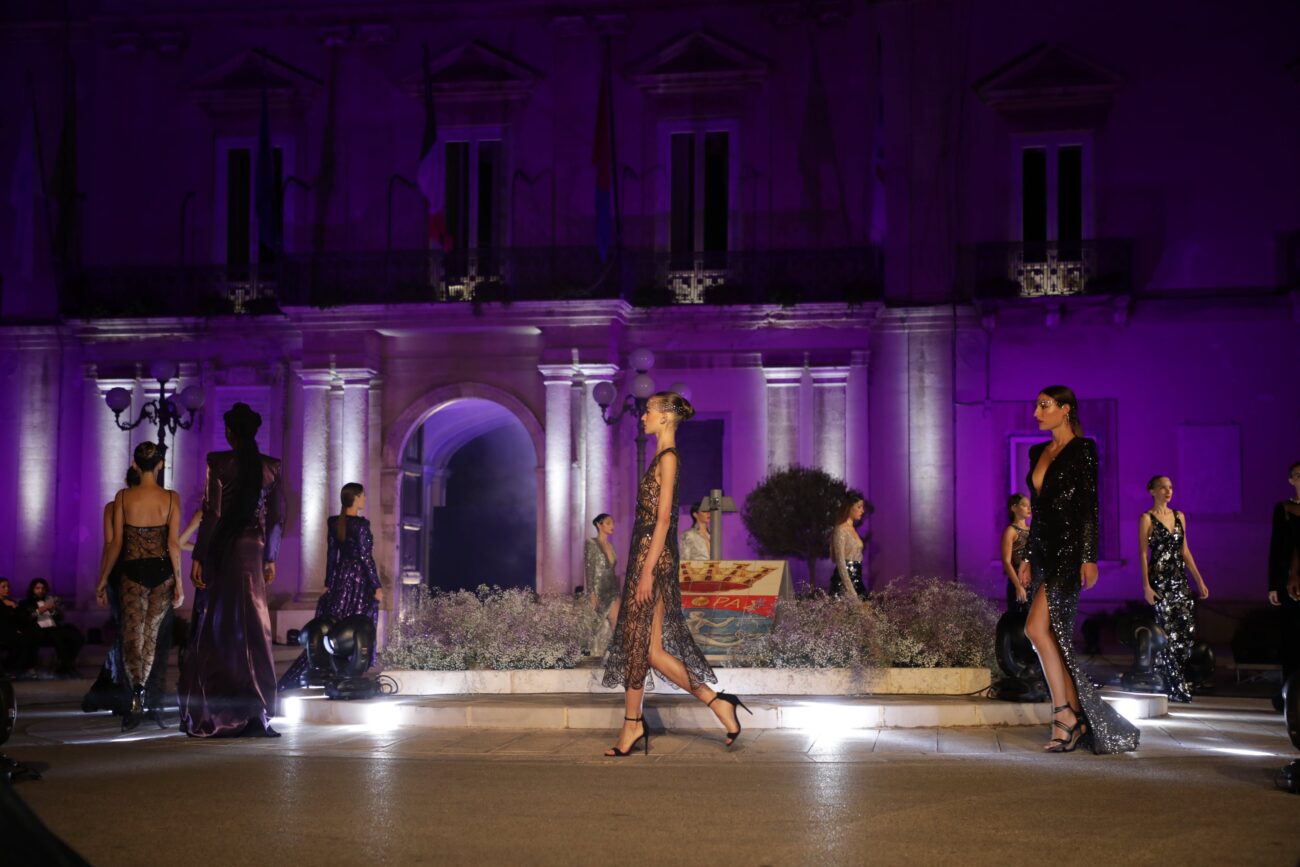 As a guest of the new format “Méditerranée – Taranto e la Dolce vita”, dedicated to Puglia and focused, for this first edition, to the city of Taranto, Gianluca Saitto presented 30 outfits of his “Couture in fieri” collection

The project intends to value the city of Taranto that is living a period of “renaissance” becoming the stage of many events, expression of the eternal union between art, fashion, culture, history and traditions. In this context, the event dedicated to Gianluca Saitto, who brought his haute couture creations in the heart of Taranto, in Piazza Castello, a place with a strong symbolic meaning: it was the agora of the ancient Taranto, of which today The two Doric columns remain, and where the Aragonese Castle with the Revolving Bridge overlooks, two icons of the tourist Taranto, and the Town Hall that represents the “good government” of all those who love the city and want to see its return to glory.

Authentic signature of Gianluca Saitto, embroideries and applications are meticulously handmade, the feminine silhouette is accentuated by transparency, bold cuts, sui generis treatments of materials, shiny and metallic fabrics, which refer to the shiny looks of rockstars, an inexhaustible source of inspiration for the Maison. For the show, some looks of Saitto were completed with haute couture hats created by Pasquale Bonfilio, an artistic milliner of Milan.

Gianluca Saitto says: “I accepted with great enthusiasm the invitation of Mario Rigo and Angelo Labriola, creators of the format “Méditerranée”, who want to make a concrete contribution to the city. I was immediately fascinated by the hidden beauty of the city, which was the cradle of Magna Grecia, a place rich of traditions, that from a glorious past looks at the challenges of the future. In the same way I draw, in my research, from the best artisanal traditions, such as embroidery, to transform them into something contemporary. In the heart of the ancient city, I presented 30 items that summarise the course of those 10 years of activity, where the protagonists are dresses with nuances of gold and silver, looks that play on an exceptional brightness accentuated by the precious broderies and crystals applied by hand. A true tribute to Italian know-how”.
“The “Couture in fieri” collection, showed in Taranto – commented Mario Rigo of Méditerranée – “is a compendium of Gianluca Saitto’s most spectacular creations and of his vision about fashion in constant evolution (in fieri that is in progress), with which the traditions of embroidery enhance evening dresses and suits with structured jackets, in a contemporary perspective. It is just the kind of tailoring that could be done in our Taranto”.
With Saitto’s fashion show, the first edition of the “Méditerranée – Taranto and the Dolce Vita” concludes. An event that transformed the historic center of Taranto into a laboratory of solutions to make more livable the ancient part of the city, a treasure of millennial history, with a project that involves Institutions (Municipality of Taranto and Region) and local entrepreneurs. Mario Rigo and Angelo Labriola conclude: “It was very important for us to organize a first major haute couture event in Taranto, the beginning of a long series of events created to enhance our city and the handmade. Our goal is to rediscover the values of our territory, its roots, its art, and culture with a constructive attitude. For this reason, we activated, through the round table and the event dedicated to Saitto, some projects to recover even ancient crafts and craft shops in the noble palaces under restoration. For example, we want to revive the local tradition of byssus, a technique used by high fashion, that can be reborn thanks to young people. We want to create a bridge with Milan, since Apulia is a major production center for fashion. In this way, Taranto could form the new generations in the recovery of these endangered trades and give an opportunity to stay actively on the site. Together with the municipal administration and the numerous entrepreneurs we will highlight the often-hidden beauty of this territory. And we thank Gianluca Saitto who first has given his art to discover the ancient city in an unprecedented way “.

SoMeWHere, OvER The HorIzON