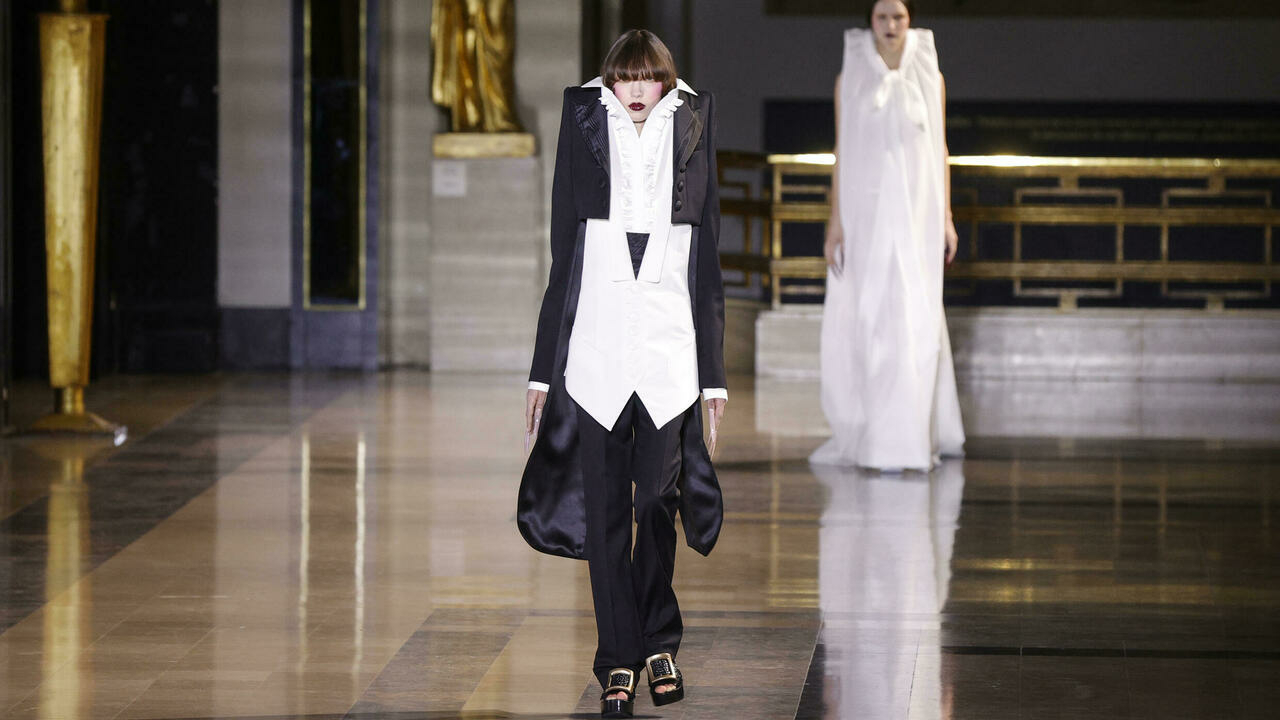 While Elsa Schiaparelli’s original vision of surrealism has infatuated the fashion world for decades, in a time of uncertainty and hopelessness, Daniel Roseberry instead looking to the empyreal for inspiration; ancient cosmology, elemental goddesses and the highest form of heavens. A minimalist palette of black, white and gold allows Roseberry’s intrinsically boundary-defying vision of powerful priestesses to shine brighter than ever while conjuring an elemental expression of god-like gorgeousness. Ephemeral movements help shape this collection as an orbital space odyssey. Saturn rings float effortlessly around shoulders and bags, feather headdresses dance as though sentient and a shower of gold strands rain down around a black cocktail dress like living tendrils. Roseberry’s quintessential use of gold is more prescient than ever. This season, cascades of coral-like forms encage arms, necks and, at times, entire bodies in lieu of any fabric at all. This extraterrestrial elegance transcends to never-before reached realms of fashion.

Though Dior’s haute couture show must have taken place in Paris, but its heart was in India. For its Spring-Summer 2022 show, the French luxury fashion house’s creative director Maria Grazia Chiuri displayed the Indian arts and embroidery in all its glory presenting the work of Madhvi and Manu Parekh, a couple of Indian artists. Dior’s show at the Paris Fashion Week featured the work of the above-mentioned artists, which entirely covered the walls of the runway and the set was entirely created by the ateliers at the Chanakya School of Craft, under the direction of Nehal Shah and Karishma Swali, co-founder of JADE, by Monica and Karishma. That was precisely the effect desired by Maria Grazia Chiuri, who conceived the collection as a celebration of craftsmanship, and in particular, of Dior’s network of suppliers, stretching from Paris halfway across the world. Considering that embroidery was one of the central themes of the collection, it was surprising that so many of the looks were unadorned. There was an almost monastic simplicity to items like a black velvet opera cape, or a flowing ecru evening gown with a scooped Empire neckline. Decoration was used sparsely, with the exception of the spangled acrobat’s bodysuits and tights that dotted the lineup, and embroidered shoes that were fit for a latter-day Marie-Antoinette. But it took no fewer than seven specialized workshops to produce the collection.

In the Grand Palais, the dreamlike situation is amplified by Sebastien Tellier‘s soft music, and detonated by the opening of the show, with Charlotte Casiraghi walking down the catwalk astride a beautiful horse. Announcing an equestrian-themed collection? No, rather, the flow follows a rhythm of continuous diversions, a bit like a dream in which everything is constantly changing. Holding together the wandering detour is the vaguely geometric touch of Virginie Viard, the creative director who is giving Chanel a new freshness, here we celebrate a delicate, feminine woman.

At today’s show Glenn Martens gave us at a joyful, escapist exercise in what you can do when you’re let loose in the wunderateliers that are the Jean Paul Gaultier workrooms, and you yourself are a designer who’s not exactly averse to getting a little inventive, maybe even a little crazy, with the construction and execution of your work.That’s what makes Martens’s version of Gaultier couture fly: the acknowledgement that it can’t be a retread of the past glories of one of fashion’s greatest designers, but instead honor what went before and incorporate the best of yourself. It is not a collaboration but a conversation, a constant state of respectfully going back and forth between incoming designer and the heritage of the house.

Viktor&Rolf building on corsets worn underneath each look, the designers raised the shoulders of their silhouettes well above the neck, achieving an effect similar to the iconic image of Dracula as imagined by old Hollywood. “Dracula is such a powerful symbol of the fear of change in society. In old Hollywood films you have the archetypal scary image of the person at the door. This made us think of a line of shoulders that we developed almost 30 years ago, in our very first collection for the Hyères competition in 1993,” explains Rolf Snoeren. They won that competition with a collection based on gestures related to the idea of hiding”. Through a current lens, said Snoeren, “it’s a bit of the opposite: going out into the world again, but with caution”.

Azzaro no physical show, but a great video, shot on the outskirts of Paris in the city’s largest roof garden, with dozens of perforated columns created to grow tomatoes, which also served as the ideal backdrop for this collection.
An absolutely co-ed experience, in which Theyskens dressed both sexes in metallic sequin dresses, silver for the girls, auburn for the boys, all paired with edgy boots.
The industrial soundtrack was ideal to accompany the liquid metal tunics and sequined sheath dresses that barely covered the figure and the American collar. Surprisingly, the most advanced materials were reserved for men. Like the pearlised men’s suit, so dense with mini shell shapes that it looked as if it had been plucked from the Wild Atlantic Way, the picturesque coastal road in the west of Ireland. But the best creation was the pinstripe suit in which the stripe is three-dimensional, revealing itself to be composed of thousands of shattered metal studs, oblong figures and scribbles.

Valentino was a democratising move, resulting in sensuous looks such as fuller-figured models in off-the-shoulder long and midi dresses or an elegant ivory dolman sleeve top paired with a curvy metallic sequin fishtail skirt. In keeping with current trends, there were plenty of micro skirts as well, worn with beautifully decorated coats and black hosiery. Piccioli’s with his ANATOMY OF COUTURE thoughtful move reflects society’s shift towards body empowerment.

The Eternal Rome, the spirituality of Rome, the heavenly Rome, a city that never ceases to inspire the creative director of the Fendi women’s lines, Kim Jones, who once again thought of the historic capital for his new haute couture collection that was shown in Paris. Crossing the layers of Roman temporality, from its ancient past to its imaginary future, for spring 2022 Kim Jones presents a Fendi Couture collection that draws on fantasy and reality to land in an otherworldly present. Here, the city’s historical codes, its statuesque marbles and ecclesiastical aesthetics, are explored in a futuristic setting.