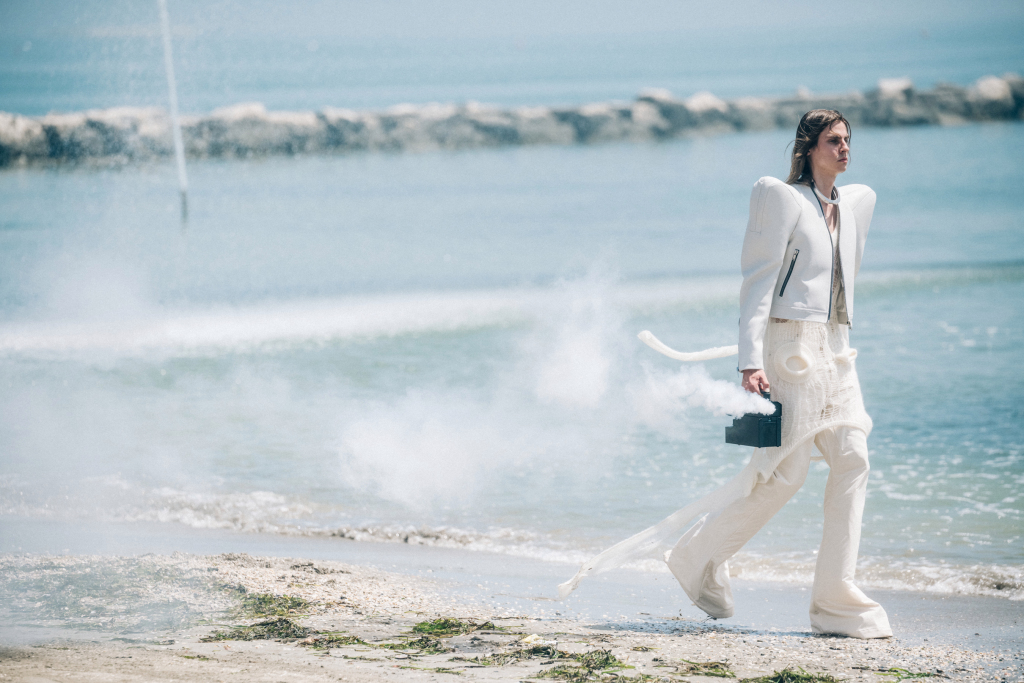 Paris is split down the middle, between those who see it as pensive and introspective, and those who, on the contrary, see it as a joy of living. But you know, once the party’s over, there’s an awakening of conscience. Remember Gretta in The Dubliners?

Serenity, groundedness, and a connection with the cultural and elemental were all sewn into this Undercover Collection by Jun Takahashi. It was christened “Once in a Lifetime” in honor not of Talking Heads but to reflect the translation of a key adage by the 16th-century tea master Sen Rikyū. He redefined the Japanese tea ceremony around the concepts of wabi (deliberate simplicity in daily living) and sabi (appreciation of the old and faded).

If wabi and sabi are the salt and pepper that season enlightenment, then place is what provides the space and time in which to digest and express it. According to Takahashi: “For this collection, I worked in a great environment: a brand new studio located in a mountain where I can walk down to the beach [and] cherish the ordinary. It reflects my wish to create designs that are not excessively decorative, but deeply rooted in everyday life.” Thus between sky and sea, the designer worked via the medium of clothing to reflect the philosophy delivered 400-ish years ago by Shukō through the presentation of tea. Fashion and sabi seem directly oppositional—and indeed the only literal fade here was discernible in the wash of denim—but among the hats, robe-coats and geta-evolved flip flops, Takahashi included old forms of dress that have faded from the contemporary. Equally, his commitment to wabi seemed to be stretched by the inclusion of graphics in the style of Ogre You Asshole, the quaintly-named Japanese rock band, but perhaps these could be thought of as a kind of calligraphic gesture. This Undercover fashion ceremony was presented in a clearly prescribed order of echoes that ran: Japanese dress, house dress, tailoring, workwear functional, sports/streetwear.

Near his home, Rick Owens, on the Lido di Venezia—a mighty-but-melancholy fall-cloud-shrouded show that was chiefly inspired by Mann’s Death in Venice.

Platform boots, with special side pockets in which to hide mini fog machines and create a vivid trail of steam. A few metres offshore, four powerful water jets were installed, spraying joyful bursts of seawater up, up, up into the flawless blue sky: “Ejaculation“,  said Owens, “is joy”. Those vast, joyous ejaculations aside, sublimely rhythmed by Mochipet’s techno soundtrack, the main idea of the collection is the three sizes of portable fog machines from which this collection, ‘Fogachine’, took its name. “I got fixated on the whole fog thing because we are entering a festive period. And I love fog in its ambiguity. It has religious overtones, it has amyl nitrate overtones, it has stadium rock concert overtones… and it’s all these celebrations of everyone coming together to achieve a different level of experience, a different supernatural level.”

Dior returns to the catwalks and does so by collaborating with the musician Travis Scott. As a background for the collection there is a hallucinated scenario that is halfway between the desert landscapes of Texas and the rose gardens loved by Christian Dior. This collaboration between the American singer and Kim Jones represents an encounter between two different cultures. Nonetheless, we are not so sure that it works to perfection. The shapes are elongated and comfortable. Loose-fitting shirts stand next to more defined jackets with asymmetrical closures. The colours are the same we saw in Milan: white, black and pastel pink, with few exceptions, such as neon green. It seems like there are all the elements to perfectly face the 2022 summer season. However, it is like something is missing. Travis Scott is not a designer and unfortunately it is clear here. The collection fascinates at first glance but does not conquer completely. It remains suspended in the middle between a very exhibited streetwear soul and a somewhat anonymous composure. It is a pity for a brand that has as creative director one of the brilliant minds of recent generations.

Loewe instead does better, creating a brilliant dialogue between the works of German artist Florian Krewer and the photographs of British artist David Sims. No digital or physical presentation for Loewe, which has chosen to publish two books to present the 2022 summer collection. In the first book there are the works by Krewer, who was an inspiration for creative director Jonathan Anderson. The second book is dedicated to the pieces of the collection pictured by Sims. As Burberry did, also Loewe pays homage to the club culture. But while the collection by Riccardo Tisci was all about the dark ravers, Anderson’s creations have a playful soul that makes you want to dance barefoot. Electric colours, loose shapes, oversized tees and some experimental material – such as pants made of ropes – for garments suitable for new millennium hippies.

Minimal instead the proposal of Jil Sanders, which reflects on the months spent locked inside our houses. Quite basic garments such as baseball hats, polo shirts, trench coats and utility jackets for a collection that proposes comfort as a strong point. Few prints and a preference for monochrome, for garments that do not give in to the temptation of uncontrolled fantasy after the forced closure due to the pandemic. And after months of wearing only tracksuits and pajamas, it seems that Jil Sanders wants to keep that comfort even in everyday metropolitan life.

Paul Smith also confronts himself with the dramatic reality that we have been forced to live. The lockdown must have pushed the British designer to think about nature and life in the open air. The collection is a love song dedicated to Tuscany and its colours. Of course, there are checks and stripes, Paul Smith’s trademark. Most of the garments play, however, on the various shades of yellow, brown, light blue and coral pink. The prints with the sunflower, another declared homage to the Tuscan land, are in evidence on bomber jackets, knitted sweaters and shirts, and they are the unifying motif of the collection. We also highlight the bags, made with a vintage canvas in collaboration with the Japanese brand Porter. Another sign of devotion by Paul Smith to a country he loves. Ultra-light textiles and very soft shapes confirm that this collection is designed for outdoor life and the pieces seem really “easy to wear”, as Smith himself said.

The happiness that has so far featured on the catwalks of Milan and Paris is completely absent from Yoshi Yamamoto‘s vision.  His presentation could be described as a journey into the shadows, into our unconscious.

There is a more cautious view of the world, of course, but no less fascinating. Black and ivory hybrid suits hark back to his spring 1986 menswear collection, in a whispered nod to upcycling, the process of reclaiming materials or products to create new objects. Yamamoto tells the story of his collection through the eyes of blue-collar workers, whose dirty faces almost look like something out of a Dickens book. “To represent being close to all human beings, mixing all social categories”. The jewellery is made from mechanical tools, the final silhouettes of the costumes – printed with real newspapers from recent months and smeared with paint as in a painting – are a testimony to today’s society. Surrealist details such as hands and eyes drawn by the Japanese artist are present in the collection. In surrealist iconography. One is a symbol of creation, of making art, the other a visualisation of our psyche.

Antwerp has never been so enjoyable, thanks to the sophisticated kitsch of Dries Van Noten‘s Antwerp postcards.

Thom Browne‘s new spring-summer 2022 men’s collection uses the language of film through a short film entitled Looking Forward to Tomorrow, where dawn chases sunset and vice versa, in a succession of perpetual motion days. Set in the vast plains of northern New Mexico, the film depicts the pleasant solitude of a marathon runner during training. He wakes up at dawn and trains until sunset, day after day, in a structure that evokes the conceptual works of Richard Long, British photographer and sculptor. The intention is to express the relationship between man and the environment as a creative act par excellence, intimate and primitive, devoid of cumbersome voluntaristic implications: this is why the protagonist trains on the streets and rests at night, in solitude, but without feeling its weight. Training and resting, while time passes until the day of the race, in which he competes with his opponents as in an animated version of Thom Browne’s own drawings. The runner, after crossing the city, finally arrives at the stadium, crossing the finish line, but then his life begins again at home, where once again he is alone but not lonely. Waiting “anxiously”, as Browne himself puts it, for tomorrow.

Virgil Abloh for Louis Vuitton presents the collection through a film entitled Amen Break (the name is taken from a unique example of a drum solo consisting of four bars that changed the course of music in the 20th century and is the basis of hip hop).

Clothes become costumes for a cinematic action. What Abloh is doing is not a video, but a real film with the script, the set design, the lighting, the photography.

Directed by Mahfuz Sultan, the short film is an interpretation of the story of Lupe Fiasco, an American rapper from Southside Chicago who lived through the restlessness of the 1970s and 1980s whose father, a drummer and member of the Black Panther Party, organised martial arts classes to provide an alternative to the turmoil of the street. He became a local legend because his work helped to neutralise preconceptions and give new opportunities to the neighbourhood kids. The ordinariness of this narrative becomes extraordinary precisely because it is enhanced by the costumes; it is like a Wes Anderson film where the costumes are always the protagonists and never the story.