ThE BIg AppLE SPlIT IN TWO 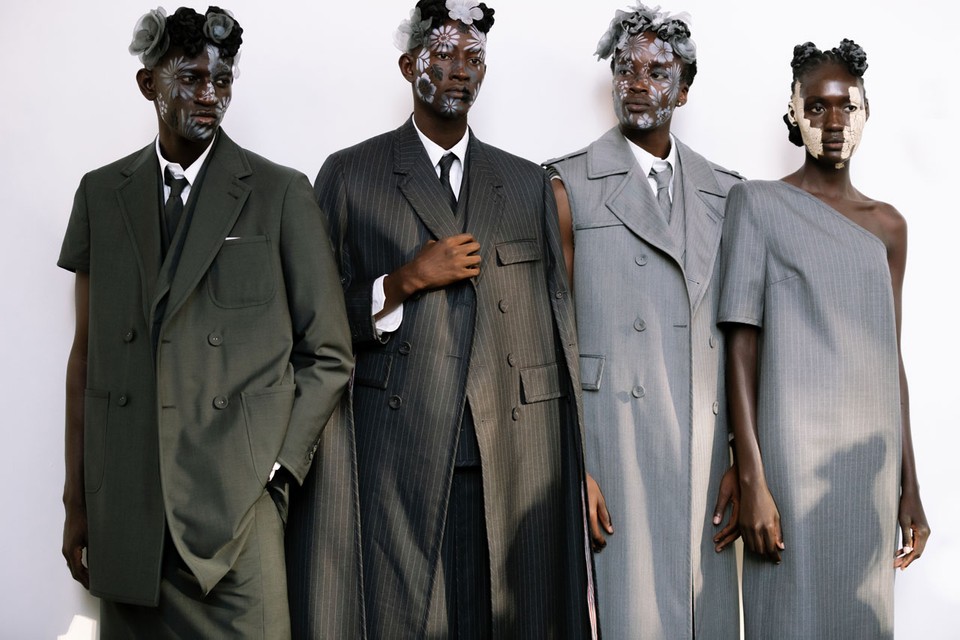 Minimalist and maximalist approaches coexist at New York Fashion Week, but the essence of the body is the key point of every collection

This week the twentieth anniversary of the attack on the Twin Towers was commemorated. Today, twenty years later, we are faced with another tragedy, a healthy one. “We are the hollow men / We are the stuffed men”, as T.S. Eliot wrote in 1925. And what can fashion do in the face of these events without appeal? What answers can it give?

New York Fashion Week, which ended a few days ago, seems to be trying to give us those answers. There is History, of course, with capital H, and then there are the stories, the personal ones, those lived in the silences of our own intimacy. And it is within those silences that fashion seems to be able to work, to give us an antidote to the crumbling action of bigger-than-us events.

It is intimacy, his own intimacy, that Willy Chavarria shows in a barber shop through its collection. There are baggy pants and oversized cuban collar shirts, there are leather jackets and satin long-sleeved shirts. But Chavarria manages to look to the past without being nostalgic. The show opens with four models wearing veeery oversized pleated trousers, cinched at the waist and paired with contrasting hyper-coloured shorts. The collars of the shirts spread out to cover the shoulders and the flowing shapes of the garments seem to hide masculine muscles. The time for toxic masculinity is over and Chavarria has understood it, bringing together Latin culture with the street spirit of the Big Apple.

But New York Fashion Week is not just about synthesis, it is also about excess and research, as Threeasfour testifies. The collection by those “alien freaks” is divided into seven colour groups, from yellow to blue, each representing a different chakra. With the help of waterless 3D printing by Kornit Digital, each chakra has been matched with a fractal. In this way, leggings, puffer coats and hoodies coexist with more visionary outfits, literally constructed as if they were pieces of design or altermodern architecture.

On the other side of the fence seems to be Helmut Lang, who, as tradition, devotes all his attention to details, to the communicative codes underlying the garment. The unisex collection for spring-summer 2022 is created collectively by the design team, as Helmut Lang has been a designerless brand since 2005. The pieces look wrapped or bound, like suitcases at the airport, while utility jackets and trousers are filled with zips and pockets. Lang’s creative team wonders what the jacket is for now if, in the age of the pandemic, people no longer go to the office. The answer is simple: it expresses class and elegance. Although, that does not mean it cannot also be comfortable. Aa a consequence, the jacket opens up into a deep V-neck or hybridises with workwear styles, for a collection that would look great on a modern Fight Club characters.

Discontinuity seems to be the key word of this New York fashion week. The proposals arriving from overseas seem to be divided between a minimalist and a maximalist approach, between those who work on the essence of each garment and those who affirm that the time of joie de vivre is back.

Among the latter seems to be Tom Ford, who is not ashamed to say that “Instagram will save fashion”. With this statement in mind, the collection presented at Lincoln Center’s Koch Theater is a whirlwind of shiny sequins, electric colours and gold sparkles. The collection manages to combine, in an almost miraculous way, oversized satin blazers in bright colours with relaxed athleisure-y shapes. “They say I don’t like colour, but my first Gucci show was full of it, as were my collections for Yves Saint Laurent. I think that this is a hopeful collection at a moment when we all need hope. We need that now more than ever,” says Ford. Certainly, it is not a collection designed for those who want to go unnoticed, and it recalls the dark glamour atmosphere of Nocturnal Animals, a film directed by Ford himself, and an ‘80s disco party. It is exactly the party spirit that animates these creations, which condense all the glamour of the age of social networks and the glittering spirit of the The City that Never Sleeps.

On the minimalist front, on the other hand, we find Thom Browne, who is able to offer perhaps the most beautiful response to those who, at New York Fashion Week, asked for balance and concreteness to guide us in the future of the present. The two hundred looks of the collection were on the catway at the Griffin Theatre, in a semi-abandoned garden, where there was no shortage of references to classical and Renaissance statuary. The models rode bicycles, or they moved around the stage like animated statues, in an atmosphere that recalls for a moment the great show-runways of the late 1990s. But the most important part, of course, are the clothes of the men and women’s collection, which Browne presents in the Big Apple after an absence of four years. The distinctive elements of the brand are all there, from the use of seersucker to the inordinate passion for uniforms. Minimalism translates into a maniacal attention to shapes, which fall straight and rigid, and render the body a single geometric block, in a practice in which there is no longer any point in talking about the curves of the female body or the shouted anatomies of the male one. Coats lose their sleeves, tops and jackets are shortened, skirts become very high-waisted, in a rhythmic balance that works for both menswear and womenswear. But this renewed sartorial tradition does not exclude a large group of colourful dresses which, as in a trompe l’oeil à la Schiaparelli, simulate the features of classical statuary through the patient working and overlapping of layers of tulle. A perfect, coherent, contemporary statement of intent. At the dawn of the post-Covid era, in a metropolitan reality that renews itself every day, even men, Thom Browne seems to tell us, have the right to wear a peplum.

HOW To BE a SKiNGiRL

TEe TIMe hAs nEVeR bEen So cHIC