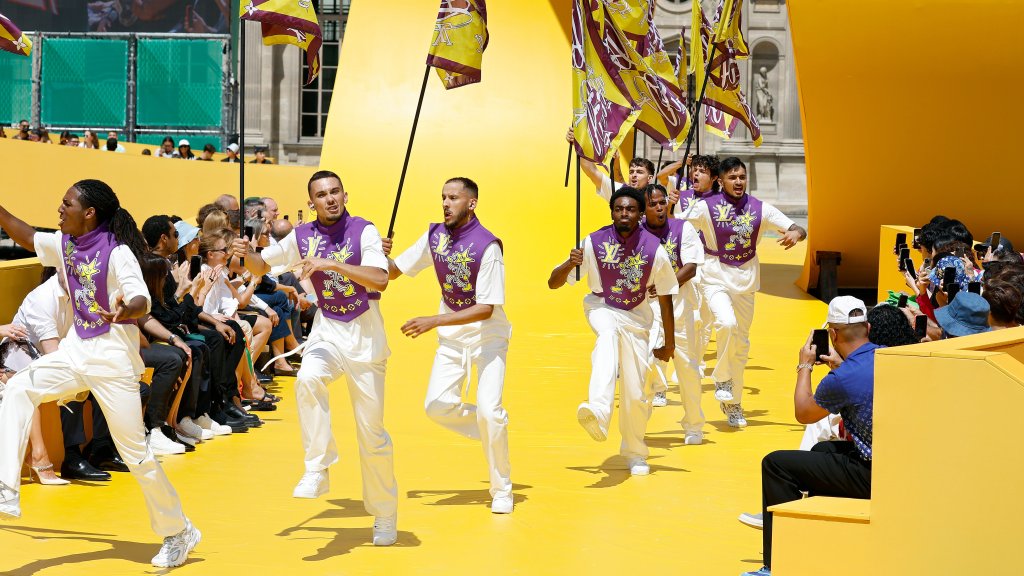 United by the belief that imagination can heal, regenerate, and uplift, the Louis Vuitton Men’s Studio presents the Spring-Summer 2023 Collection. Like a magnified playground, a giant children’s toy racetrack erected in the Cour Carrée of the Louvre becomes a yellow brick road for the imagination: an evolutionary path for the mind where childlike fantasies come to life

Colour and poise feature quite prominently as inspiration on Louis Vuitton’s moodboard for their Spring collection, which look all but literal. It’s a timelessness in crescendo, where fashion codes are subverted, grown-up, chic and acquire a sleek bent, keeping the exoticism at bay. So thank goodness a collection is just a collection—at the end of the day, for most designers, fashion does the talking. But in  this case, there was something more special and less straightforward in those seams that looked polished and underground. Leaving core references aside (which perpetually changed throughout, given the mise en place of the house following the change of direction), it focused on customary brilliant tailoring, adding an incredible play on volumes and refining dying techniques. The style here revolves around daywear dressing. If you want to look well put together for a friendly party while wearing a meticulously-cut piece that your partner will be jealous of, the maison is yours for the taking.

Fabrics had a luxe vibe and were substantial enough to hold in place the colours and textures that formed the core of the collection. It felt somewhat natural and pared-pack, in spite of the vibrancy galore, making shapes softly sculptural and keeping lines in balance. It had an all-encompassing bright vibe (purples, greens, yellows and a sugar-sweet palette of pastels were featured aplenty), giving the surface textiles a subtle, seductive shine.

That’s because imagination is at the heart of Louis Vuitton. A visual manifestation of our hopes and ideas, it has the power to heal, regenerate and uplift us. The Spring-Summer 2023 Men’s Collection was conceived and created by the Louis Vuitton Studio Prêt-à-Porter Homme: an ever-evolving ecosystem of creative minds, who welcomed Virgil Abloh to the Maison in 2018 and expanded during his eight seasons of artistic direction. A living testament to his talent for bringing people together, they populate a creative playground more than a century in the making. At the timeless core of the Louis Vuitton studio is the belief that imagination – creatorship, craftsmanship, showmanship – can move and unite its spectators around the world. It’s the heritage on which Virgil Abloh based his practice at the Maison and the philosophy that continues to drive the Studio Prêt-à-Porter Homme. As a creative community who shared a monumental experience, they embraced the SpringSummer 2023 Men’s Collection as a cathartic process: a proposal created in the spirit of all the human minds that shape Louis Vuitton.

Can A fASHIon sHOW beCOMe a POLItical STATEmenT?